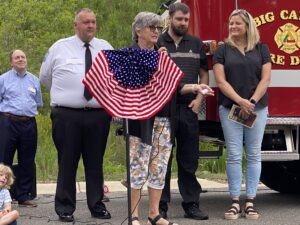 The family of Mike Carrig, the Big Canoe volunteer fire fighter who died in May, presented a check for $15,000 to the department of Public Safety at the christening ceremony for the department’s new fire truck.

“I thought (the donation) was a good way to honor him and the community,” says Linda Carrig. “We have a good volunteer Fire Department and I can trust them to spend the money well.”

A naval officer and pilot for Delta Airlines during his career, Mike found ways to continue serving people in retirement that allowed him to keep wearing a uniform while doing so, says Linda. Along with being a singer in the Chapel choir, Mike enjoyed his time working with the department.

“He liked giving back,” she says. “It was the fun, the camaraderie. He was interested in using new skills to help protect the community and make this community safe.”

The post Carrig family donates to Big Canoe Public Safety in Honor of Mike Carrig appeared first on Inside the Gates.