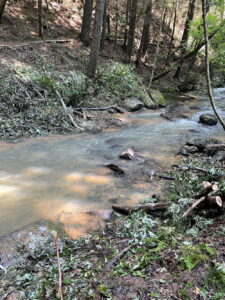 Rain brings certain angst for trail committee members. There is a high likelihood that a rain event will present clean-up opportunities. Mother Nature doesn’t always clean up after herself – she has staff for that. Committee members are conditioned to inspect the trails after weather events to get a first-hand account of her handiwork. Sometimes she behaves herself, but more often than not, she decides to show her destructive side.

Before any work being done. Let the day begin.

Mother Nature was particularly mean-spirited on July 20. John and Jim Hansen anticipated some level of damage as they inspected the John Williams Trail after yet another rainstorm, but were not fully prepared for what they encountered.

A full accounting of the damage was necessary in order to put a clean-up plan into action. A large tree had fallen on the Covered Bridge Trail above the loop section. The large tree took down three more trees dumping them and itself into the creek. The John Williams Trail was completely blocked. Mother Nature should know better than to mess with the Hansen brothers. They know people.

John and Jim cleaned up as much as they could on Monday to make the John Williams Trail passable for the hikers who were already on the trail. They moved to the other side of the creek on the loop section and

cleared a path for the hikers, but the three downed trees were crossing the trail. The trail was no longer safe. Time to call Liz to arrange for reinforcements. Mitch, Glenn, Bill, Don, Phil, Clardy, and Liz answered the call on Tuesday. Clardy is the proud owner of a very large chainsaw and he knows how to use it. Clardy dropped the trees, and the others hauled as much as they could out of the creek and to the shore. The heat and humidity was a formidable foe, but the team pressed on. The team spent 3 ½ hours and made significant progress, but the loop trail was still blocked. The decision was made to attack again on Wednesday.

Wednesday’s team of Liz, Clardy, Don, Jim, and John continued to unclog the creek. This required members to wade into the water with chainsaws. Nobody complained about cooling off in the water with a heat index of 110. It took three hours, but every bit of the debris field was hauled to the shore. The loop trail is now open for hiking thanks to Clardy and his trusty chainsaw. There is lots of cosmetic work left to be done, but that will be for another day.
Monday crew Mitch, Glenn, Bill, Don, Phil, Clardy, and LizWednesday Crew, Jim, John, Clardy, Don and LizWednesday Crew, Jim, John, Clardy, Don and Liz
John trying to escape through a tunnel but Liz caught him and made him do more workJust another day on the Big Canoe Trails Committee

40 hours of labor later – creek and trail is clear

The post Do not mess with the resolve of the Trails Committee appeared first on Inside the Gates.