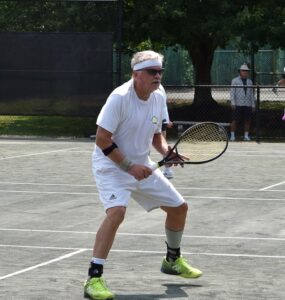 Big Canoe has had its share of residents with a serious athletic pedigree. Hall of Fame NFL  quarterback Fran Tarkenton lived here in 1977. And Wimbledon finalist and Australian Open winner Roscoe Tanner also logged time in the mountains of Big Canoe.

However, Big Canoe has never been home to an athlete while they were still at the top of their game – until now.

Chris Bussert, who has lived part-time in Big Canoe since 2006, recently achieved the No. 1 national ranking as one half of a doubles team in the United States Tennis Association’s men’s 65 and older division. He and his playing partner, Danny Carlson, have been tearing up the senior circuit, with recent wins at the Atlanta and Asheville senior invitationals; the National Men’s 65s Indoors in Minneapolis; and national team events in Asheville, N.C., and Hilton Head, S.C.

If Chris, 65, looks like he might be more at ease clutching a law book than a tennis racket, it’s for good reason: he’s still a practicing attorney, specializing in intellectual property law as a senior counsel at the Atlanta office of Kilpatrick Townsend & Stockton (https://www.kilpatricktownsend.com/en/People/B/BussertChristopherP.)

Chris stepped off the court long enough to sit down to reflect on his accomplishments.

Chris and his partner’s record: Since they began playing together in January 2020, they have a 27-2 record, have won five national tournaments and were runners-up twice. Individually, they are tied for first in the country. Chris is also ranked individually in the top 10 in the world in the men’s 65 doubles division. (Doubles players are individually ranked in international competition).

Chris’ time in Big Canoe: Though he has lived here part-time since 2006, Chris didn’t make Big Canoe his permanent home until June 2020. The USTA, the national governing body for the sport of tennis, requires players to designate a city where they are based. Chris recently changed it from Decatur to Big Canoe. “I have had to get very good with my elevator pitch about Big Canoe as I get questioned about it at every tournament,” he says. “And I wear my Big Canoe tennis club shirt proudly.”

His Big Canoe elevator pitch: “It is one of the premier tennis facilities certainly in the state of Georgia,” he says. “The clay courts are extremely well-maintained and you also have two fully insulated indoor courts with premium LED lighting. An extremely friendly tennis community. Never a problem getting a court. And the surrounding area is gorgeous – it’s like playing tennis in a nature preserve. Of all the places we looked at, there is really nothing like this.”

Keeping it in the family: Chris also plays father son doubles with his 32-year-old son Shaun Bussert. They have two national championships among their accomplishments: The Senior Father Son Indoors in 2016 and the Senior Father Son Grass Court in 2017.

What makes Chris’ play stand out: “He’s a throwback kind of player,” says part-time Big Canoe resident John Hanna, the publisher of Net News (https://www.netnewsmag.com/), the official publication of the Atlanta Lawn Tennis Association (ALTA). “His strokes are somewhat unconventional. He’s got a pretty nasty forehand – and I mean that in a positive way – because he slices it so it stays low and then the other guy has to hit the ball up.” Typically, the first tennis player forced to hit the ball higher tends to lose the point.

On maintaining his health in a physically punishing sport: “You have to spend at least as much time in the gym as you do on the court,” he says. “I have been working with Terence Griggs in the Wellness Center for the last five months to improve flexibility and endurance. The key is making sure that before you hit your first ball you are limber and warmed up. I stretch for a good 20 minutes before I hit a tennis ball. And you have to plan your rest days.”

Battle-scarred but still going: “I should tell you that I have had five major surgeries in the last six years,” he says. The injury list includes a torn quadriceps tendon in 2012, which he retore and had repaired in 2016; a broken fifth metatarsal in his left foot in 2017 and a broken fifth metatarsal in his right foot in 2018; and a hip resurfacing on his left hip in 2020. “I have been basically playing partial years every year because of the surgeries,” he adds.

Other accomplishments: When he was a student-athlete at Division III Kalamazoo College, he won the Division III national singles and doubles championships in 1978 and became the only player in Division III history to score a win at the Division I tournament in Athens, Ga. He played the satellite tour in 1979-80 including the Wimbledon and U.S. Clay Court qualifiers in 1980.

Why he stopped playing in his 20s: “I made the determination that I was no threat to break into the top 100,” he recalls, “So I went to law school . . . got married, had kids and essentially stopped playing for 24 years. I put my toe back in the water in my 50s, but I really started playing seriously again when I turned 60.”

His favorite thing about Big Canoe: “Whatever your interest is, it seems like there is a club for that. I started playing in the ping pong club Wednesday nights at the Wellness Center. It has been fun. But it’s the people I have interacted with who have been exemplary: (Wellness Activities Director) Steve Panetta, Terence Griggs, (Racquet Club Manager) Linda Powell. They have all enhanced the experience and it’s been great. I’m really glad we made the move here.”