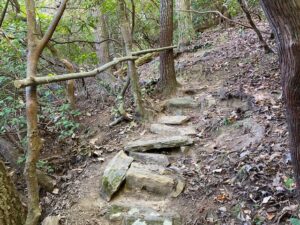 The Big Canoe Trails Committee is always busy maintaining Big Canoe’s most popular amenity. Along with dealing with downed trees, eroding trails, and the usual upkeep, they also have the leeway to get resourceful and creative in adding new features to our 25 miles of curated pathways.

Since the Christmas holidays are one of the busier times for the trails, Mitch Waldman of the Big Canoe Trails Committee provided us with this update on what’s new. Be sure to look for the committee’s handiwork the next time you and your crew hit the trails. And you might even spot a few new signs to boot.

Unblocked Drains at the Indian Mounds Park – If you hear water running under Quail Cove Drive where the Indian Mounds Trail meets the Lake Petit Trail, you can thank the committee. They removed the mass of debris that had blocked the pipes that run under the road and repurposed the sandy base, which was used to cover exposed roots on other parts of the trail.

New Stairways and a Bridge at Yellow Root – The Yellow Root Access Trail, which connects Yellow Root Drive with the Jeep Trail, has two newly repaired stairways and a walking bridge, thanks to Trails Committee. The railroad ties in the stairways were replaced with fresh pine timber, and the refurbished bridge is back to looking like new.

Mike Davis Trail Cleanup – The Mike Davis Trail, named in honor of the longtime trail committee steward, was cleared of downed branches and debris. The team weeded the area, trimmed trees, and layered soil over the most hazardous exposed roots.

Natural Handrails – Along the Meditation Trails (John Williams, Covered Bridge, Blackwell Creek, and Nature trails) and the Lake Trail around Lake Disharoon, natural handrails made from fallen sapling trees were constructed along the steep inclines. What’s extra cool is that no nails were used in their construction.

Joe Tipton Bench – At marker #8 along the Red Trail on the Wildcat Trail, there is a naturalistic, wood-and-stone bench designed by Joe Tipton, whose fingerprints are all over the High Gap Trail. This new addition was recently dedicated it to Big Canoe’s 50th Anniversary, which you can read more about here.

Thank you, Trails Committee, for all your hard work!

To get a copy of their Trails Map, click here.

The post New Trail Features to Look for on Your Holiday Hikes appeared first on Inside the Gates.