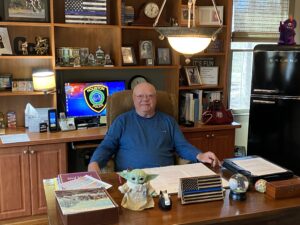 Everything in Buddy Williams’ office has a story.

The photo of world-class bicyclists happens to feature his son Christian and grandson Noah zooming along. The Martini-Henry rifle, used in the Battle of Rorke’s Drift in the 1871 Anglo-Zulu War, hangs on the wall as a symbol of Buddy’s ardent interest in history. And the assorted headgear on display, from a Texas A&M football helmet to police headwear from around the world, reflect the primary passions of the Texas-born retired law enforcement officer.

And then there is the Baby Yoda doll which, judging from the prime real estate it takes up on Buddy’s desk, illustrates his fondness for the larger Star Wars universe and the “Mandalorian” TV series.

“I set him on my desk to keep an eye on me,” says Buddy from his Big Canoe home in Wedgewood, “make sure I’m not screwing up.”

Buddy Williams was Detective Sergeant of the Houston Police Department before he retired and came to Big Canoe.

The retired 30-year law enforcement vet and former Detective Sergeant of the Houston Police Department has made his mark on our community in Big Canoe in many ways. He has worked with the Architectural and Environmental Control Committee. He used his communications skills – sharpened from running a Texas police newspaper for 26 years – to help campaigns for POA Board election candidates. And he has served as Vice President of the MGA and been the MGA liaison to the Member-Guest Tournament, which is in Big Canoe Thursday, June 9, through Saturday, June 11.

For the latest in our ongoing Q&A series celebrating the people in our community, we got Buddy to put down the sticks long enough and answer a few questions about his life in Big Canoe.

Q: How did you end up in Big Canoe?
A: My wife Pat and I moved to Big Canoe in 2010 following our Georgia daughter’s recommendation to check this place out. Since we moved from an upscale Texas lake community, we wanted the same character of natural surroundings – rural but close to city amenities. And most importantly, no Big Wheels in the neighbor’s driveways. After driving only as far as the Clubhouse, I decided if we could afford to build a house here, we would. We could and did – first in Choctaw Village. In 2014 we moved to the Wedgewood area and love to watch the golfers from our deck above the Cherokee 6 green.

Q: How did you get the nickname Buddy and does anyone call you by your given name of Gerald?
A: No, that was my father’s name, too, so technically I am a junior. He died in a work-related accident seven months before I was born. Out of respect for him, I use Gerald only for legal purposes. Buddy is a childhood nickname that just stuck. My older sister tells me that was our dog’s name when I was little and when the dog was called, I came running, too. I don’t believe that for a minute, though.

Q: Walk us through a perfect day in Big Canoe for you?
A: It would include sleeping late, coffee on the deck with my lady Pat, 18 holes during the day, dinner and drinks with friends at the Clubhouse that evening. Actually, that sounds like a typical day for us here.

Q: Can you share something about yourself that would surprise most people?
A: I’m very emotional about my family and not afraid to cry when one of them does well, which happily happens often.

Q: Like numerous other Big Canoe residents, you had a career in law enforcement. What is the attraction of Big Canoe for ex-law enforcement?
A: I can’t answer for the other retired law-enforcement folks hereabouts, but after working the streets of a big city for decades, I knew I wanted to retire to the quiet life. And be surrounded by men and women whom I could trust. You can’t do that just anywhere.

Q: What did you like about serving as the AECC? When did you start?
A: It’s an easy job for a former professional rule enforcer. It was easy for me to say, “No. Just follow the rules.” I recently only did a two-year stint and enjoyed working with those great, hard-working folks on the committee.

Q: You have raised the issue about security in Big Canoe more than once in public forums. From your perspective as a former law enforcement officer, how serious of an issue is security for the community?
A: I think we are a very safe and secure community for the most part. However, I would like to see more proactive measures taken to keep it that way. I’ve got a million ideas. I want people to be able to say, “Wow, Big Canoe is very serious about security.” They don’t say that now.

Q: You were raving about the renovated Creek 9. Tell us what you love about the course?
A: Even at its very young age and difficulty, I think the new Creek course is fantastic. I have no doubt that by this time next year it will come to be known as one of the finest nine holes of golf in Georgia.

Q: What person, dead or alive, do you most admire?
A: No question – Winston Churchill. In my opinion, he saved the Western world through his actions during WWII.

Q: What talent would you most like to have?
A: Even though I was a trained, a high-performance driver. I would love to be able to drive a car the way my wife wants me to drive it.

Q: Describe the happiest moment of your life?
A: Too many to pick from, but near the top was my wedding day. Although I was pretty happy back when I was a cop, it was the day a guy tried to run over me in a car and missed. But that was more a matter of relief, I guess.

Q: If you could change one thing about yourself, what would you be?
A: My weight. And hair. I’d love to have hair.

Q: What is your motto?
A: “Your feelings end at the beginning of my rights.” I think that works for everyone.

Q: If you could be anywhere else right now, where would it be?
A: There is nowhere else in the world I would rather be than right here in Big Canoe. Another couple of weeks in Ireland again would be nice, though. My wife, Pat, was born in Limerick and we love it there.

The post Q&A with MGA Vice President and law enforcement vet Buddy Williams appeared first on Inside the Gates.