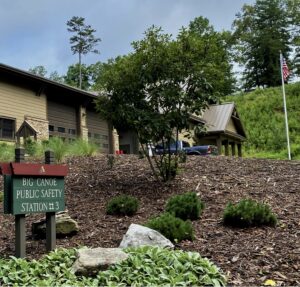 Living in the safety of a gated community is one of the biggest draws for those who have made Big Canoe their adopted home.

Unfortunately, almost every week, small firestorms of misinformation break out, which leads numerous Property Owners to assume the worst about security in Big Canoe.

Ricky Jordan, the director of Public Safety, has seen it all in his 21 years with the POA. According to Jordan, one of the seldom-acknowledged facts about rules violations or crimes in Big Canoe is that a large majority are perpetrated by a Big Canoe Property Owner or by someone they’ve let onto the property.

Ricky sat down to address numerous concerns and questions about Big Canoe that have been raised through Ask the POA, via social media, and through his dealings with Property Owners.

Q: I heard that there was a recent home break-in in Big Canoe. How are these people getting through the gates?

A: That is incorrect. There was no actual break-in. A home security system that included a security camera documented and ultimately scared off two individuals who intended to enter a Property Owner’s home.

One of the people captured on the camera was identified as a housecleaner. She was on a Property Owner’s guest list as a service contractor. She and a male individual stayed that night in another home in the community using access codes provided by another Property Owner. Following the initial incident, the housekeeper admitted she was planning to enter the home to use the residents’ pool table. Because she was criminally trespassing, she now is no longer allowed to enter Big Canoe property.

The solution for Property Owners is 1) to frequently change security codes for locks and home security systems 2) install a system that allows a Property Owner to remotely grant immediate access to a contractor as needed and 3) NEVER put a contractor on a permanent guest list.

Q: Didn’t another break-in attempt happen in the Equestrian neighborhood on Feb. 9?

A: Again, there was a reported incident but it did not involve an attempted break-in. A woman was captured on a security camera walking outside of a home and briefly peering into a window ­– but she made no effort to enter the house. Though the Property Owners were not at home, their security system alerted them.

Public Safety was alerted and in the area within five minutes of the incident. Five minutes later, five Pickens county sheriff deputies arrived. No parked cars or individuals were spotted in the area.

Q: I am hearing that people are going through the pass box at the guard shacks to steal passes that grant them access into Big Canoe.

A: This has happened only once and it involved a Property Owner whose transponder had been deactivated when his POA accounts had become delinquent. He was looking for active passes to gain entry into Big Canoe for himself and his family.

Public Safety shreds all passes at least twice a day. The existing pass boxes are padlocked – and always have been. We are rebuilding the boxes to enhance security.

Q: I hear people can gain access to Big Canoe through unmanned gates.

A: There are nine entrances into the community of Big Canoe. The two used most often – the Main and North gates – are staffed 24/7. They also have camera surveillance 24/7.

There are also two special-purpose electronic gates, which have 24-hour camera surveillance and can be remotely operated by Public Safety staff.

Five other emergency exits have gates made from steel bars; these gates would be opened by Public Safety in case of an emergency such as a forest fire. Public Safety keeps these exits secured with padlocks and large metal chains. Because of the remote location of these gates, there is no power or internet available, which makes real-time camera surveillance unavailable. Public Safety routinely inspects these gates.

Something to keep in mind: Big Canoe is not a walled community. We are a gated access community that includes some 8,000 acres of remote land.

Q: I heard about a dog attack that injured a Property Owner and her pet last week. Why hasn’t anything been done?

A: On the evening of Feb. 10, Public Safety received a call about a dog attack and immediately responded. Public Safety officers provided medical care and started an incident report on the dog bite.

Public Safety staff members called for Pickens County Sheriff and Pickens County Animal Control.  Public Safety staff then canvased the area around the scene. None of the Property Owners approached by Public Safety reported seeing anyone who matched the description of the owner, the dog or a second canine that was not involved in the attack. Public Safety returned to the area on Feb. 12 to re-canvas and interview additional residents in an attempt to locate the owner and the dog in question. No additional information was obtained and no renters or owners in the area have dogs matching the description. Unfortunately, there is no additional information or leads to follow at this point.

A dog attack, which would be categorized as a “fine of a serious nature” per the POA Rules and Regulations, carries a fine to the dog owner of up to $5,000.

Q: Aren’t dogs in Big Canoe supposed to be leashed?

A: All dogs in Big Canoe are required to be leashed unless in a dog park that allows unleashed canines. If you see unleashed dogs, rather than confront the owner call Public Safety (706-268-3376) for an immediate response.

Q: The Sheriff’s departments from both Pickens and Dawson counties need to regularly patrol Big Canoe to make sure everyone’s safe.

A: The offices of the Pickens and Dawson sheriffs are always welcome to patrol in Big Canoe. With their limited resources and because of our expansive area, which includes more than 88 miles of roads, they are usually able to respond to only the most urgent or life-threatening calls.

Officers from these departments are also limited in what they can even enforce inside the gates of Big Canoe. For example, they are not able to cite anyone for speeding or leash law violations as they are not violations of either state or county statutes. Designated as a rural county, Pickens does not even have a leash law on the books.

The bottom line is that these departments direct their resources to areas with the greatest need for policing.

A: The primary role of Public Safety is to handle emergency calls, which include emergency medical calls; extinguish fires; and cite violations of Big Canoe’s Rules & Regulations.  More serious issues are handled by the sheriff’s departments in Pickens or Dawson counties as they have the authority and jurisdiction over all law-enforcement concerns in each respective county.

Q: Can we form neighborhood watch groups within Big Canoe?

A: We are a gated access community, not a walled community, so it’s incumbent on everyone here to be alert and aware of their surroundings.

Q: I hate the new speed limit sign. Is it even accurate?

as a visual deterrent, or what’s euphemistically known as a “traffic-calming device.” This uses radar on cars driving in the direction of the trailer’s numerical display, which presents the speed of oncoming traffic to alert drivers about a potential violation. Cars approaching the trailer from behind will not see the display.
a secondary function uses Lidar, which stands for “light detection and ranging.” This is what documents violations and provides the data for issuing citations to anyone driving at least 11 miles per hour above the posted speed limit.

If a motorist speeding toward the front of the trailer sees their speed displayed, they can slow down enough and avoid getting a citation as the Lidar won’t register them as exceeding the speed limit. However, anyone approaching the trailer from behind at more than 11 m.p.h. above the posted speed limit will not receive a visual warning and will be issued a citation and fine.

Q: Does the POA share crime statistics? Where can I see them?

A: Every POA monthly Board meeting includes a breakdown of calls made to Public Safety in the previous month. This information is accessible at the Big Canoe POA Media Channel on YouTube.

To see the most recent results, which were shared at the Jan. 27, 2022 Board meeting, go to the 11:25 mark for a breakdown of the December 2021 calls made to Public Safety. Of the 63 calls that came in December:

24 were Rules and Regulations calls, which led to 17 citations being issued
31 were EMS calls, 18 of which were handed by either Pickens or Dawson county and 13 managed by Big Canoe Public Safety response teams
eight were fire calls.

Like all Board meetings, this month’s live gathering in the Mountains View Room in the Clubhouse at 5 p.m. Thursday, Feb. 24, will include Public Safety statistics from the previous month. The meeting will also be on the Big Canoe POA Media Channel on YouTube.

The post Q&A with Ricky Jordan, Big Canoe’s Director of Public Safety appeared first on Inside the Gates.