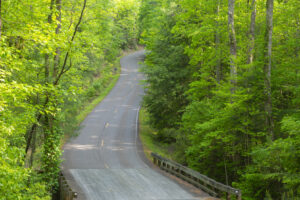 Soaking in the stunning mountain views along our curvy roads hooked many of us on Big Canoe. However, when the fog sets in, especially at higher elevations, visibility on these winding asphalt ribbons can make the experience anything but a joy ride.

Public Works is scheduled to initiate a summer-long project at the beginning of June to address the issue by installing street reflectors on every one of Big Canoe’s 88 miles of roads. The project also includes striping every street in Big Canoe that was not covered in 2020 and 2021, says Public Works Manager Jacob VanSant.

Never before has Public Works done a property-wide project of this scope, says VanSant

“This is going to take all summer, good weather permitting,” he says. “We are not going to be working up and down all of our roads all at one time. They’ll be getting several miles of road done every week.”

The installation of the reflectors aims to improve visibility on our roads, which addresses a common concern voiced often by Property Owners. The plan is to install them along the edge rather than the middle of the streets, which reduces the risk of damage caused by snowplows and other heavy equipment.

Also planned to start in June is the striping of roads throughout much of Big Canoe. Unlike other communities, Big Canoe’s winding streets create a major challenge for striping crews.

“This is a big undertaking,” VanSant explains. “It’s not like they’re putting down straight lines on a flat surface where you can run it at 30 miles per hour.”

The streets targeted for new lines are those that were not part of the last year’s or 2020’s striping efforts, which is why Property Owners won’t see any striping vehicles tackling the main roads that go from the Main Gate to the North Gate. Instead, crews will hit a lot of neighborhood roads, which get white stripes along the edge; and secondary roads, which will get a broken yellow line down the center to go with the white stripes along the edge.

If you happen upon roads with stripes that appear freshly painted, VanSant urges drivers to assume the lines are still drying so that their tires don’t disturb or smear the wet paint on the asphalt.

The post Summer sprucing in Big Canoe continues with roads getting striped, every street getting reflectors appeared first on Inside the Gates.