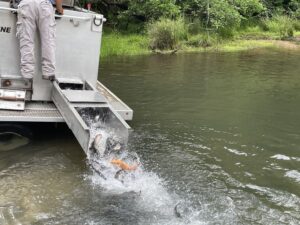 Get your rods and bait ready – the 50th anniversary Golden Trout Fishing Contest is underway!

Six of these rare Golden Rainbow Trout were included among 1,250-pounds of rainbow trout introduced into Lake Petit around noon Wednesday, May 25. Those who hook one of these uniquely hued fish can bring their prize catch to the Marina to be photographed and receive a free two-hour pontoon boat ride gift certificate.

The Golden Rainbow Trout is a mutated strain of the rainbow trout found in Lake Petit. Their golden hue is the result of selective breeding by the West Virginia Division of Natural Resources biologists. The fish was introduced to the public as part of the West Virginia centennial in 1963. Tellico Trout Farms has been stocking Lake Petit with them since 2019.

This year’s introduction of Golden Rainbow Trout is just the latest in the ongoing series of events that commemorate the golden 50th anniversary of Big Canoe.

Read more about the history of Golden Rainbow Trout here.

The post A golden opportunity for a prize catch returns to Lake Petit appeared first on Inside the Gates.