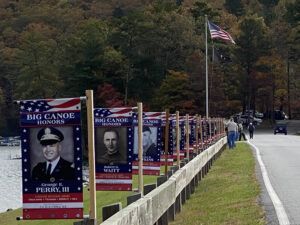 George E. Perry III’s military tribute banner flying on Lake Petit Dam might not seem especially different from the others lining the road from July 2 through July 11. It’s red, white and blue. Seven white stars run vertically along each side of the 18 x 36-inch piece of vinyl-based fabric, and a photo captures a moment of a young adult smiling at the prospect of life before him.

However, Perry’s banner, like the others lining the dam, has its own distinct back story—and a profound connection to a resident who has made Big Canoe home.

Perry was killed in action at the tail end of a tour in Vietnam in 1968. He was in Saigon waiting to return to the United States, but at the last minute chose to delay his imminent trip home by volunteering to go back to help a unit that was reportedly trapped. He never caught that plane back home.

Perry was a member of the same 1963 West Point class as longtime Big Canoe resident Dick Scharf. Both graduated with a tight-knit group of 26 classmates who served in Company H-2 of the U.S. Military Academy. The more than two dozen former cadets stayed close to one another over the years, often serving together and continuing to honor those among them who they’ve lost.

The banners, introduced to Big Canoe around Veterans Day in November 2021, are the result of a project run by the North Georgia Veterans in conjunction with Boy Scout Troop 20, the Big Canoe Woodworkers Club and the Big Canoe POA. Now, every Veterans Day, Memorial Day, and— for the first time—Fourth of July, Lake Petit Dam is transformed into a powerful memorial with banners going up to pay tribute to deceased family members and friends who served in the military.

The program has been a success, said Phil Anderson of North Georgia Veterans, with the first 82 banners flown over Veterans Day 2020. The recent Memorial Day weekend saw that number jump to 106. Ten more banners have been ordered since then. The Scouts will put up 116 fabric memorials, and, for the first time, fireworks over Lake Petit will provide a backdrop for the banners.

However, residents and visitors to Big Canoe don’t need some pyrotechnic extravaganza to appreciate their significance along Wilderness Parkway. Regardless of which direction a motorist is driving, upon emerging from the trees, the sight of the banners has a sobering effect that packs an emotional punch akin to visiting any war memorial or military cemetery.

Unlike some garden of stone, the succession of banners stands as a stark reminder of the men and women who dedicated their lives in service to their country. Some were killed in action. Others lived full lives as they dedicated their time to a military career. However they served, they all share one key characteristic: They were a family member, friend or comrade of someone living in Big Canoe.

If some of the last names appearing on the banners look familiar, it’s no coincidence, as many are related to those who call Big Canoe home. For the more unfamiliar names, the banners also list at the bottom those who sponsored each memorial. Sponsors are provided with a spreadsheet listing the exact location of their banner, which is put up and eventually taken back down by Boy Scout Troop 20.

For many, such as Anderson, it’s a chance to pay tribute to a family member: his dad, Roy G. Anderson. For others, it has another layer of meaning. For example, Scharf has put up banners for Perry and another member of his West Point group, Charles H. “Chuck” Kinsey, with whom he also served. He is also looking at soon adding a third for his senior-year roommate who died a few weeks ago.

“We are sort of a band of brothers who really cared about, looked out for and communicated with each other since 1963,” Scharf said. “It would be inappropriate for me not to recognize the fact they have had such an impact on my life. They served the country, they were stand-up citizens and they need to be recognized for what they did for us.”In many ways, the tribute banner program accomplishes that on a hyper-local level, giving everyone in Big Canoe the chance to reflect on the sacrifices made by so many connected to our community.

“The banner program is long overdue,” Scharf added. “We are a unique community of achievers and people who have been successful. For me, this is something we owe ourselves and we owe it to all of those who have helped get us where we are. This isn’t about me; It’s about us.”

For more information on the program or on ordering a tribute banner, contact NGV members Phil Anderson, anderspabc@aol.com, or Paul Goldstein, paul.f.goldstein@gmail.com.

The Fourth of July list of the individuals honored on a military tribute banner along with their Big Canoe sponsors:

The post A more reflective Independence Day appeared first on Inside the Gates.