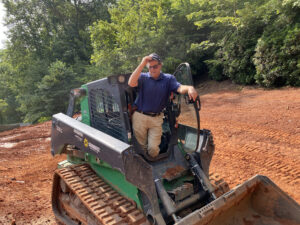 If the guy driving the green mini-dozer on the hole # 8 of the Creek Golf Course looks like he’s having too much fun, it’s for good reason.

Big Canoe Property Owner Tim Furness, who also happens to be the lead shaper on the Creek 9 rejuvenation project, has a straightforward job: he moves around a lot of dirt.

But Furness revels daily in a more purposeful variation of that kid with a toy truck atop a backyard dirt pile. In his case, he takes it to creative heights with construction equipment that cajoles soil into the shape of a bunker here or a catch basin there – all according to the design of renowned golf course architect Bill Bergin.

“He takes what Bergin put onto paper,” says Golf Course Superintendent Lydell Mack, “and he makes it a reality in the dirt.”

An experienced shaper now working on his 52nd course, Furness had worked with Bergin long before last year when he caught wind of plans for the Bergin-designed Creek 9 project. He informed the architect of his interest. Bergin in turn alerted Sanders Golf, which is managing the project.

Furness was hired and has been playing a pivotal role in making the plan come alive. He’s savoring this particular assignment in part because most jobs he has taken in his 40 years in the field have required extensive travel. The closest assignment he has secured that was relatively close to his Big Canoe home was work at TPC Sawgrass in Jacksonville, Fla. For this job, he can walk to work.

Having Furness on the project is an added bonus for the Big Canoe community, says Mack.

“It’s such a benefit to have a Property Owner involved in this project,” he says. “This is his community and it’s the golf course he plays. He wants it to be the best it could possibly be.”

Furness follows Bergin’s design specs, but even the acclaimed architect grants the shaper some creative leeway.

“Bill does a fabulous job, better than most architects, of getting it really close,” says Furness. “But you get errors in the topographic maps that don’t quite blend in. We have to make adjustments in the field for unforeseen things, but he lets me add my flair.”

“Having Tim in the neighborhood makes the job that much better,” Bergin writes in an email, “with my only issue being to manage his desire to make the course even better than our budget allows!”

Furness started golfing when he was six, played throughout his youth and later on the golf team of a small Division II college in his native Michigan. While that pointed him toward his chosen profession, growing up on a farm pretty much sealed the deal.

“When I was in kindergarten, my grandfather would walk right into the classroom and say, ‘I need Tim to come and run the tractor,’ ” Furness recalls. “So I have been playing golf and running equipment since I was five years old.

“So, put the two together,” he said, “here I am building golf courses.”

The post Home is where the course is for Creek 9 lead shaper Tim Furness appeared first on Inside the Gates.