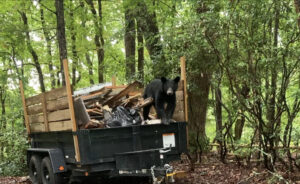 Here in the middle of September and into the fall, our black bears are overactive in their search for food. They depend on fattening up to get through their dormant winter weeks that will be spent in dens. In short, the bears are very hungry, they’ll go to extremes to find food, and they’ll remember where they’ve found it.

This week, an incident in a Big Canoe neighborhood highlighted a potential problem, demonstrating the proper way to respond.

Here’s what happened: a resident passing by spotted a black bear in the cargo bed of a trailer behind a pickup truck in a residential area. The bear had torn open a plastic bag of trash that included smelly leftover food scraps and paper garbage. The critter was enjoying what he had found and was rummaging around for more. He did not pose for photos, although a candid shot was taken as evidence.

The sighting got the attention of a Black Bear Project member who contacted our Public Safety office. Chief Ricky Jordan sent safety personnel to the site. They found that the bear had exhausted the lunch menu and wandered back into the hills. The truck and trailer belonged to a contract worker who was employed in the area, and it’s possible that the food trash was actually tossed into his open trailer by a passing vehicle, Ricky said. The homeowner was cited for an unintentional violation of BC’s regulations concerning wildlife.

So what are some lessons learned from this?

Bears are out and hungry. It’s a lot easier for them to get filled up with human food than by nibbling on nuts and berries. If they find food, they’ll be back. And that’s a BIG problem for human safety and property.
Contractors working in Big Canoe are required to have bear-proof garbage/trash receptacles on site and secured. No open-top dumpsters containing food items are allowed.
Bears live here and roam through our mountains – and our home properties – all the time. That’s OK. Even thrilling.
BUT if you see any hazardous bear activity in Big Canoe, especially in proximity to homes and humans, your very first response is to CALL PUBLIC SAFETY at 706-268-3376!

The post Bear Safety Reminder: These Guys Are Super Hungry in the Fall appeared first on Inside the Gates.