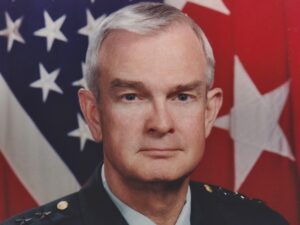 Big Canoe has long had a very vibrant and visual military presence, with multiple high-ranking military officers having taken up residence inside the gates. Among them is Lieutenant General Steve Arnold, an Army Rangers Hall of Fame inductee.

In the latest installment of our continuing Q&A series celebrating the residents of Big Canoe, we had the privilege to speak with Steve about his life as an officer and his experiences as our neighbor.

Q: How did you end up in Big Canoe?

A: My last assignment of 35 years in the Army was at Fort McPherson in Atlanta. For three years there, I served as the Commanding General, Third U.S. Army (Patton’s own), and U.S. Army Central Command (which then was responsible for Army programs in 22 countries in the Middle East and parts of Africa). During our three years, we became fond of Georgia and decided to stay. It took a while to find Big Canoe, but find it we did, with all the serenity, the beauty, the great variety of activities and a vast array of interesting, wonderful people. We love it here.

Q: Where are you from originally?

A: I was born and raised in a rural community in central Illinois.

Q: When did you serve in the military?

A: I was commissioned from West Point in 1962, retiring 35 years later in 1997. For 26 years, I served in numerous assignments as an Airborne, Ranger and Infantryman. You might say it was truly high adventure. Two of those years I was in Vietnam where I was combat wounded twice and fortunate to be awarded two Silver Stars for valor. During my last nine years in the Army, I was a general officer, serving in Korea, Saudi Arabia and Somalia.

Q: What part of your military career are you most proud of?

A: Hmmm, tough question. I think I would have to pick my service in Operation Desert Storm, reporting directly to General Schwarzkopf, as the Chief of Plans and Operations. It was an extremely demanding job that was important to our nation and I was proud to make my contributions. If someone is really interested in the details, they can be found in several books including Rick Atkinson’s “Crusade: The Untold Story of the Persian Gulf War,” Tom Clancy’s “Into the Storm,” and “The Generals’ War: The Inside Story of the Conflict in the Gulf,” by Michael R. Gordon and Gen. Bernard E. Trainor.

Q: Quite a few military personnel live in Big Canoe. What do you think it is about Big Canoe that attracts people who have served?

A: Well, I can’t speak for others, but I suspect that many like myself are seeking the calmness, the serenity and the natural beauty of Big Canoe. It’s a great place to live after the frequent moves and duty assignment changes that often seemed frantic and difficult on the family.

Q: Do you have a spouse? Children?

A: Susan is my bride of more than 50 years and has supported me and been my rock

of stability throughout our odyssey around the world, raising our three children: Steve

Jr., Guinevere, and Ben. We also have two wonderful granddaughters, Samantha, my princess, and Emily, my sports buddy, who joined me in walking the Appalachian Trail in Georgia a few years ago.

A: I love to play golf and pickleball and stay fit.

Q: What do you think people find most surprising about you?

A: Not sure, but perhaps it is the fact that I’m still not retired-retired. I’m still serving on the board with a company that supports our troops, NATO troops and UN troops, as well as the State Department in locations around the world.

Q: You’ve been a leader in a military context, but would you ever consider running for the POA Board?

A: Big Canoe is blessed with a vast reservoir of talent, many of them volunteers, who are doing a magnificent job in running this wonderful place. Plus, I’m still gainfully employed in other matters. I just want to add my thanks and appreciation for those many Big Canoe residents who have served or who are now serving our community on the POA Board or in many

other volunteer positions. We are so lucky to have you all.

The post Q&A with Lt. Gen Steve Arnold appeared first on Inside the Gates.