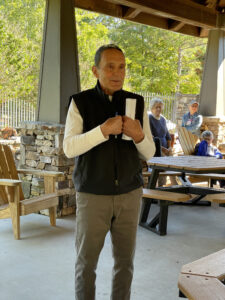 Most of us are familiar with the famous line, “just build it and they will come,” from the movie “Field of Dreams” starring Kevin Costner as the Iowa farmer who hears a voice telling him to build a baseball field in the middle of his corn farm. A somewhat crazy idea we would all agree, but despite objections and opinions, he persevered to complete his dream and we all know how that turned out.

Like Costner’s character in the movie, there are many Big Canoe residents who have the same dedication to overcoming adversity to pursue their dreams. Allan DeNiro, a Big Canoe 38-year resident, is one of those neighbors that had a vision several years ago to build a community garden in Big Canoe. Alan was the featured guest at the October Wildflower Bunch meeting and explained that his “seed of an idea” helped to inspire others who also envisioned a place for everyone in Big Canoe to have a garden that would have ample sun, water and good soil. All the residents would need to do is bring their plants and nurture them.

So why did Alan desire to build a community garden after many others had tried and failed over the years? He attributes part of his interest to his family’s ancestry. In 1918, his Italian ancestors arrived in America and made their way in the new world as horse-and-buggy fruit peddlers. A few generations later, Alan grew up in a small three-bedroom home with four brothers, one sister and parents dedicated to gardening. He recalls his father bringing a new plant, bush or tree home almost every day.

As a former healthcare recruitment and acquisition manager, Alan’s ability to be patient yet persistent enabled him to overcome challenges daily in his career. In fact, his philosophy of business is that “the greatest success comes from not knowing what you are doing and having everyone tell you can’t do it, because then you have nothing to lose.”

As it turns out, this is exactly the mindset it would take to create his vision. He proudly claims that he is a “bee in a barrel” when it comes to making up his mind to do something and he would need that attitude along his three-year journey to get approval to build the community garden in Big Canoe. There were opinions by many including those who were all for the garden “as long as it was not in their backyard.” The first task was to find a piece of land that the POA would approve of using and then begin finding the solutions for necessities such as: water, good soil and protecting the garden from wildlife issues.

Initially, Alan presented his ideas to the POA with a plan for 30 plots and with each question and concern raised, he and his team would research and address them all. After everyone’s due diligence, approval was finally given to rent a piece of land from the POA off of Hubbard Road across from the Northgate, but the POA was clear that this would not be a sanctioned amenity and it must have extensive liability insurance coverage. In addition, all expenses for building and maintaining the garden would fall solely on the shoulders of his dedicated team of volunteers and future members.

The real work and construction began a little over a year ago, to create “a community within a community” with the daunting goal of a May 2022 grand opening. Each challenge was faced with resolute determination. With capital of $48,000, the not-for-profit 501C began by bringing in truckloads of organic dirt and gravel to create the foundation of the garden for the galvanized steel beds that would be added. An eight-foot electric fence was constructed around the entire 12,000-square-foot garden, and water was piped in from a source over 850 feet away. Electricity was sourced via solar power in keeping with the self-sustaining plan.

We can all be proud and grateful to Allan and his team for their dedication. Big Canoe’s Community Garden is now one of the largest community gardens in the southeast with 98 plots maintained and enjoyed by homeowners for a very affordable annual upfront fee of $132. Currently, there is a waiting list for interested residents, but donations are always welcomed. For information about becoming a member, contact BigCanoeGarden1@gmail.com.  Open enrollment for 2023 is coming soon.

The post Big Canoe Community Garden – The Art of Pursuit appeared first on Inside the Gates.