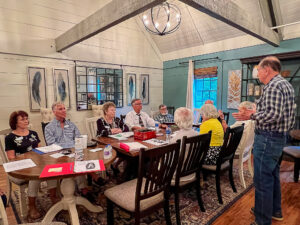 The Big Canoe Playreaders will present “Twelve Angry Men” at the Sconti Point Room of the Clubhouse at Lake Sconti at 4 p.m. Wednesday, Sept. 14. “Twelve Angry Men” is the story of 12 jurors in a New York City jury room charged with determining the fate of a young boy accused of his father’s murder. Since the charge is first-degree murder, the boy will be put to death if found guilty.

The play – originally a one-hour TV drama in 1957 – was later adapted for two movies; the more famous film starred Henry Fonda and Lee J. Cobb. For our performance, we cast four women and eight men. It appears initially that the jurors will make a quick decision. Each juror sees the case through his or her own filters. It’s only human.  But perhaps the filters are faulty and there is more to be seen by removing or replacing them. One juror thinks so. What makes the story pertinent to me is the obvious realization that each of us today – in these polarized times with unrelenting noise and images – is trying to make sense of life by looking at the world through filters we’ve found comfortable and deem perfectly sensible.

This will be the fifth Big Canoe Playreaders presentation over the last six years. Two things make it unusual for us: It’s the largest cast we’ve ever had and everyone is on stage at once and for the whole show. For this performance veteran players Jon May, Erika Jaskiewicz, Ken Nichols, Shiraz Alikhan, Dennis Shearer and Rob Ricklef will be joined by first-timers Buddy Williams, Rhonda Stock, Carmen Crouch, Judi Schoeler, Brian Rob and Mike Domanik.

This playreading concept comes from my experiences years ago with a small group of friends meeting in our homes and after one rehearsal reading the play among friends and family. I proposed the idea to my old friend Jon May and Erika Jaskiewicz.  Jon had no stage experience and Erika has plenty.  Other friends were cajoled into the venture and we’ve all enjoyed the camaraderie in the preparation and the kick from reading to an audience. From there we have grown to our current plans.

Two years ago, Tim Moran videotaped the playreaders presentation of “A Christmas Carol,” accompanied by piano and cello. Other shows presented include “The Lion in Winter,” “You Know I Can’t Hear You When the Water’s Running” and “On Golden Pond.”

For those interested in attending, please email me at hubley12@aol.com to assure seat availability.

The post Big Canoe Playreaders to Present Reading of “Twelve Angry Men” at Clubhouse on Wednesday appeared first on Inside the Gates.