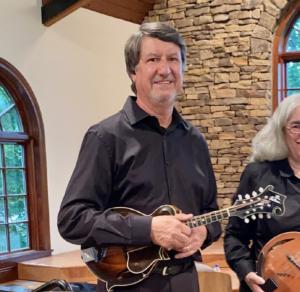 Big Canoe will receive a spectacular birthday gift for its 50th anniversary a month early.

Bob Knysz, a Big Canoe resident and musician who performs around Big Canoe in various groups, has composed a song with fellow resident Shiraz Alikhan in honor of the Big Canoe community. He will introduce the new song, entitled “Livin’ Right,” at the Mountain Twilight Concert on Sept. 10.

Bob is a man of many musical hats. He’s a regular at the Acoustic Showcase, which is presented at the Beach Club on the first Thursday of every month. He’s also the concertmaster of the Atlanta Mandolin Orchestra, the president of the Atlanta Mandolin Society, the leader of the 8th of January bluegrass band, a player for the Mandolin Consort of Atlanta mandolin quintet and he’s a soloist performer. Bob was approached last year by Susan Willson, co-chair of the 50th Anniversary Task Force, about writing a song about Big Canoe’s milestone. He, of course, accepted.

“I first nailed down the melody,” Bob says, “and then the words just kind of flew into it.”

Bob worked with Shiraz Alikhan, another Acoustic Showcase regular, to refine the lyrics. Bob describes the song as having a “new acoustic” feel with its use of mandolin and violin.

“The music tends to be a little towards the bluegrass genre,” Bob says. “Violin and mandolin are traditionally part of a bluegrass band, but we’re mixing it up with percussion and guitars for a fuller sound.”

Joining Bob on stage will be what he calls the Big Canoe All-Star Band, which will include Shiraz on guitar, Brad Morgan on bass, Art Shand on fiddle, Frank Brewer on guitar and Steve Smeltz on drums. Bob, naturally, will be playing the mandolin.

“I’ve been here (in Big Canoe) for almost nine years now,” Bob says. “It’s a special place for me and my wife, Barbara. The words and feel of the song ‘Livin’ Right’ not only have meanings for myself – but I hope for the rest of the residents here.”

The post Bob Knysz to Present Big Canoe With a Song for 50th Anniversary appeared first on Inside the Gates.