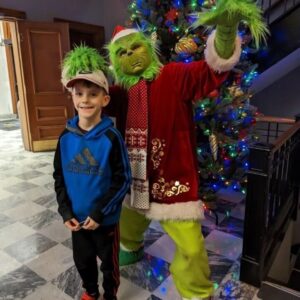 The Grinch will be stopping by the Clubhouse on Thursday, Dec. 22, to share his story and introduce the 2018 movie based on the iconic Dr. Seuss character. While the kids may never question how a green-furred character made his way into our community, parents might have a sneaking feeling that there is someone behind the green makeup and animated gestures at this year’s Christmas Movie Night.

That someone is none other than Terry Allee, a retired teacher from Gordon County who found a new calling as a character performer.

Terry’s unusual career path began in the 1980s when he saw the film “Teachers.” In it, one of the few successful teachers in the film dressed up as historical characters to liven up his lessons. When Terry realized he and his world history students were bored, he decided to try that same tactic. His students were won over by the theatrical presentation and, needless to say, it stuck.

“By the time I retired, I was doing about 70 historic character programs a semester and had created almost 200 different ones,” Terry said.

The number now is closer to 400, with Terry continuing to create new ones every year. Just between November and December, he can do roughly 80 to 100 events, including school visits, open houses, home visits, corporate events, parades and weddings.

“Every single program I do is unique,” Terry said. “I never use a script. I write an outline and then do extensive research. I try to inhabit a character.”

When Terry arrives on Thursday in his Grinch costume, he’ll be bringing that same dedication and improv talent to the kids inside the gates. Before he hits the stage, his plan is to first interact with the audience to get the attention of the room. He will be socializing, offering photo ops (and possibly doing some photo bombs), and will then begin reading the story. After that, his plan is to do what he does best – improvise.

“The thing I want people to get from my Grinch is that when they leave, they feel like they really know him,” Terry said.

“The Grinch” event is at 5:30 p.m. on Thursday, Dec. 22 will be complimentary to all children and adults. To register, click here.

For more information about Terry, visit his website at http://mralleesworldofhistory.com.