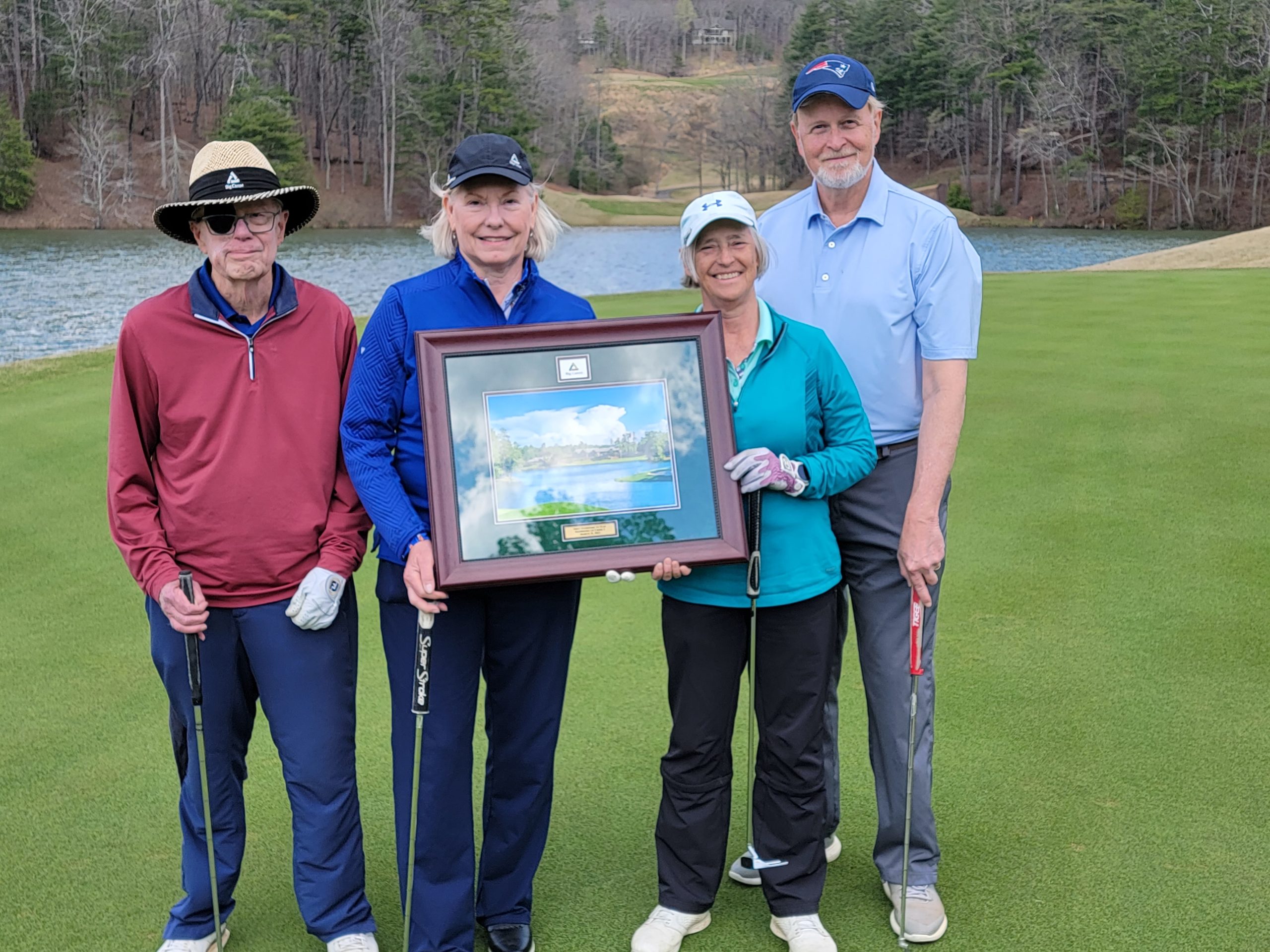 There is a lot to like about the just re-opened Creek 9, according to the few lucky golfers who today got their first swing at the redesigned course.

But in the words of long-time Big Canoe resident Ron Honeycutt, who was on hand with his wife Susan for the Creek renovation in 2000, the course has “come full circle again,” Ron said.

“It added more distance for the better players and had closer tees for those who don’t hit it so far,” he added shortly after playing the nine holes with Susan. “And if you look at the demographics of Big Canoe with the younger people who are coming in and the older people who are here, they did a great job” meeting the needs of both groups.

Before Honeycutts were able to enjoy the course, the opening day festivities kicked off the chilly morning with Board President Amy Tropfenbaum leading the ribbon-cutting ceremony near the Duffer’s Patio before a crowd of about 60 coffee-and-donut fueled golf enthusiasts.

“We’re here today to celebrate the completion of work that’s been years in the making,” Tropfenbaum said, “as an example of bringing our vision of providing high-quality amenities with well-maintained infrastructure to life. This is an example of the first of many projects we’ll do over the next five to 10 years to make that vision a reality.”

Joining the scissor-wielding Tropfenbaum to address the crowd was course designer Bill Bergen, Board member Regis Falinski, General Manager Scott Auer and Director of Operations and former Golf Maintenance Superintendent Lydell Mack – who were all involved with either the planning, designing, shepherding or building of the revitalized course. Ellen MacArthur, the women’s club champion, and Jason Harvard, the men’s club champion, hit the ceremonial first tee shots.

While today was the official opening day, a lucky foursome that included Bob Cooper, Judy and Bill Melville and Janet Vandenbark won the lottery to test drive the Creek a day early on Thursday.

“The redesign was definitely worth the cost,” Cooper said. “There are a lot of improvements with the drainage and with tree removal in the appropriate spots, which the average golfer might not see. But you have some nice course improvements where the sand traps are, which made the shots fairer and more challenging at the same time.”

Cooper highlighted the new greens as well as the redesign of holes 4 and 5 among his favorite upgrades. “Overall,” he said, “it’s definitely an improved course.”

Martha Seferian, who was wrapped up her golf day around noon, said the subtle yet smart improvements improved the course while not making it substantially more difficult.

“I loved it,” Seferian said after completing nine holes. “You play something for 20 years and then you get to go on the same course but play it differently. I can’t wait to play it again.”

To learn more about Creek 9, visit the detailed website created by Mark Green about the new Creek 9 course and everything that went into the project.

The post Creek 9 re-opens with plenty of fanfare – and some very happy golfers appeared first on Inside the Gates.