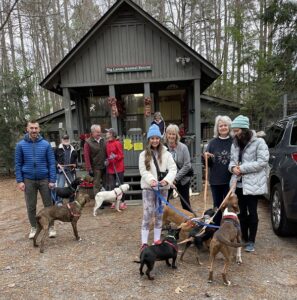 Big Canoe Animal Rescue is our community’s well-known resource for dog and cat rescue, rehabilitation, and adoption. You’re probably familiar with the organization from seeing photos of its foster animals on Facebook or in Smoke Signals. And you may have heard of some of the stories the animals it assisted, from Sinbad, the 99-pound, Great Pyrenees escapist artist; to Brody, the Plott hound fond of “singing”; to Jojo, the chihuahua mix whose sight was restored.

Sinbad under a Japanese Maple.

What you may not know is that this organization has been with our community, evolving and broadening its scope over more than 30 years. In those three decades, BCAR has seen a lot of changes along with Big Canoe – and has collected its fair share of inspiring stories along the way.

Big Canoe began with a serious animal problem: One issue when settling out in the mountain woods is that the local wildlife typically isn’t keen on respecting property lines. In the 1970s, however, the “wildlife” our community struggled with included packs of stray or feral dogs. There were no county animal control officers or animal shelters in Pickens or Dawson counties, says Tom Attaway, a co-president of BCAR, where he also serves as the canine medical director, director of outreach, and field training coordinator.

“Stray dogs were often shot,” Tom says. “Wild dogs are much like coyotes in that they are typically afraid of humans and avoid them. Like coyotes, they can become a nuisance, and a risk to pets or children allowed to go outside, supervised or not supervised.”

This problem endured until 1989 when a group of Big Canoe residents got together to address the issue.

BCAR was the first animal shelter in Pickens and Dawson counties: In 1989, Ginger Hall and Suzanne Doll founded Canine Rescue, which was much more singularly focused on fostering dogs. Their original set-up was also considerably humbler than it is today: Canine Rescue consisted of two pens that contained about half of a dozen dogs. They were covered pens, but, unfortunately, poorly insulated. Some 20 volunteers drove the entirety of the effort.

“Nowadays, I got 50 or 60 just on kennel duty,” says Liz Wintter, also a co-president at BCAR as well as the canine kennel manager and director of supplies.

In 1994, the group was renamed the Big Canoe Animal Rescue and became the first no-kill organization in the area, which meant that all healthy and treatable dogs in their care would be saved.

Donations have kept it going: BCAR is and has always been a non-profit organization, and it developed into the organization it is today due to the donations received from the community. The North Gate location, which was previously the old guard shack, was a gift from the community given to them in 1998.

BCAR didn’t accept cats until recently: For more than 20 years, BCAR fostered only dogs. Under the leadership of Maggie Holmes, who had previously been fostering stray cats in her own home, the organization in 2015 built a cat shelter right next to the dog shelter. They called it Maggie’s House in her honor.

“We figured that if we built it, they will come,” Tom says. “And they have! For the last four years, we’ve taken in about a cat or kitten a week.”

The organization has become a powerhouse for animal fostering: BCAR has come a long way from having two pens. It has become one of the region’s central organizations for animal rescue efforts. BCAR provides financial support to the Pickens County Animal Shelter through Be-Paws We Care, a fundraising organization that also operates a low-cost spay and neuter program for local dogs and cats. BCAR works closely with the county animal control officers, the county shelters, other local animal rescue shelters, local low-cost spay and neuter organizations, and other animal welfare organizations. And it has an outreach program that helps families in need in Pickens County feed their dogs.

As for their work in Big Canoe, they certainly aren’t in danger of getting bored.

Each of these animals, of course, has to be housed, socialized, fed, and groomed on a routine basis. It’s a lot of work, but both Tom and Liz are passionate about the efforts.

Disco, Liz Wintters own dog, was a rescue at BCAR.

“One of the most rewarding things” about our work,” Liz says, “is to see dogs that were scared to death now have a life where they’re not scared, abused, or neglected.”

You can be a part of the BCAR story:

If you’d like to support BCAR, you can donate through their page.

If you’re interested in adopting, check out the website to see the dogs and cats currently in need of a home. You can also come to an open house at the shelter from 11 a.m. to 2 p.m. every Saturday to meet and spend time with the dogs or cats. If one of them captures your heart, you can fill out an application online and begin the adoption process.

This article is part of an ongoing series looking back at the 50-year legacy of Big Canoe.

The post Reflections at 50: Big Canoe Animal Rescue appeared first on Inside the Gates.