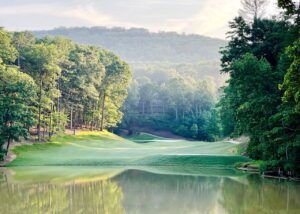 After more than a year of being redesigned, reshaped and renewed, Big Canoe’s first golf course – the Creek 9 – is finally reopening. The project helps realize the new Big Canoe Strategic Plan Vision statement, which calls for “high-quality amenities along with well-maintained and updated infrastructure.”

At 8:30 a.m. Friday, April 1, Creek 9 is having its formal coming-out party at Duffer’s Patio behind the Clubhouse on Lake Sconti. Board president Amy Tropfenbaum will be joined by fellow Board member Regis Falinski, General Manager Scott Auer, and Director of Operations Lydell Mack for a ribbon-cutting ceremony that opens the course.

Capping off the festivities are Ellen MacArthur, the women’s club champion, and Jason Harvard, the men’s club champion, who will each hit the ceremonial first tee shots. After the gathering, nine golfing foursomes will break in the course at about 9:30 a.m. by starting their rounds at each of Creek’s nine holes.

Sanders Golf Construction and Bergin Golf Designs led the rejuvenation with work that included an update of the course’s aging infrastructure; a long-overdue revitalization of its greens and tee boxes; and the replacement of deteriorating drainage and irrigation systems that were a quarter of a century past their life expectancy. The revamped design addresses the infrastructure of the course and updates Creek 9 so that it’s much more playable to golfers of varying skill levels. Along with Bergin, Sanders and POA crew members, those involved in the course’s rejuvenation included Big Canoe Property Owner Tim Furness, who was the lead shaper on the project.

To learn more about Creek 9, visit Mark Green’s detailed website about the new Creek 9 course and everything that went into the project.

The post Creek 9 set to open with ribbon-cutting ceremony on April 1 appeared first on Inside the Gates.