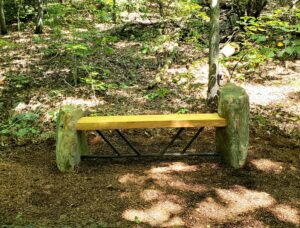 In the five decades since it was founded, Big Canoe, through its staff and residents, has created a welcoming retreat in our mountain environment.

Joe Tipton, a member of the Big Canoe Trails Committee, has honored these efforts with a labor of love of his own: a naturalistic, wood-and-stone bench on the Red Trail at Wildcat, dedicated to Big Canoe’s 50th Anniversary.

Joe is no stranger to these passion projects. He designed our High Gap Park, using his own lumber to build the steps for the steepest parts of the trail. These efforts were recognized when the POA awarded him the 2020 President’s Award.

What makes this project special isn’t just the anniversary it recognizes, but the material it’s made from. The metal for the bench comes from the collection of Richard Hudock, a Property Owner who passed away in June. An avid golfer with a huge social circle, Richard was also known as an ever-busy handyman.

Other contributors include Terry Nicholson, who made the post and the holder on which the plaque sits; and Brad Herren, who installed and stained the post and attached the plaque.

The bench at marker #8 on the Red Trail is in a shaded area in view of a brook.

Thank you, Joe, Richard, Terry and Brad, for this wonderful gift.