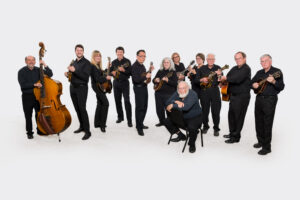 When the highly popular Atlanta Mandolin Orchestra gets cranked up you can expect a rousingly good time. Better make plans now to enjoy the concert at Big Canoe Chapel at 4 p.m. on Sunday, April 24. You’ll hear the best of American classic music including tributes to Frank Sinatra, Glen Campbell, Patsy Cline, a Spiritual Trilogy and others.

Conducted by Robb Smith, a graduate of the Geneva Conservatory of Music and principal trombonist for the Atlanta Ballet Orchestra, the ensemble consists of some of the most talented musicians in the U.S. playing mandolins, mandolas, mandocellos, guitars and bass. The Atlanta Mandolin Orchestra has been entertaining since 1994 throughout greater Atlanta at civic centers, performing arts venues, churches, conventions, universities and many other special events.

Tickets are $10 and payable at the door. To pre-pay on a resident lot number, simply scan the QR code on the concert poster at the Postal Facility.  For more information, contact Big Canoe Chapel at 470-273-6768.

The post Mandolins, Mandolas, Mandocellos, Oh My! appeared first on Inside the Gates.