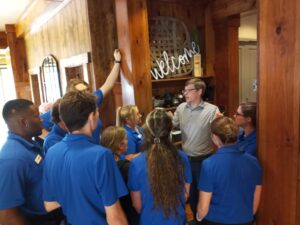 Jonathan Prince, a Clubhouse fixture whose roots as a POA staffer go back a dozen years, has been named the new food and beverage manager.

A popular presence in the Clubhouse, Jonathan was named the new F&B manager at a time when the Clubhouse is undergoing some exciting changes.

On the heels of the return of the popular Sunday brunch buffet, which has consistently sold out since it was re-introduced on July 18, the Clubhouse will expand its offerings to include a Tuesday seating for dinner starting Aug. 24. New hours that day are extended to 7 p.m., with the final seating at 6 p.m. The amended schedule also will allow for the Bear Society and the POA to present special entertainment events on Tuesday evening in the coming weeks.

With the success of brunch, the Clubhouse will focus its Sundays more on that midday meal and revise its service starting Aug. 22 with brunch from 10:30 a.m.-2:30 p.m. and the restaurant closing at 3 p.m. No bar service or food service is available in the Clubhouse for the rest of the day, but Duffers is open till 5 p.m. for beverages and food.

While Jonathan will oversee these changes, he is also at work on some additional restaurant upgrades that will go beyond a few tweaks to the menu. More delicious details to come in the next few weeks.

Jonathan’s duties will include: working with Chef David Bakitas on the creation of menus and assorted libations; hiring and training of all staff; improving the level of customer service; and driving the improvement of the Clubhouse financials. The Clubhouse this year is on track to cut losses by more than half, which were at $780,000 in 2019.

Jonathan got his start in Big Canoe working in the snack bar at the Swim Club, now the Beach Club, in 2009. He left the POA but returned to take on such jobs as the pantry chef before assuming more front-of-house duties where he became a familiar face to many Clubhouse patrons. In recent years, Jonathan has made such a positive, steadying impression around the Clubhouse that when a Property Owner suggested at a July 17 Town Hall that the POA hire him permanently as the food and beverage manager, it was met by a hearty round of applause from the audience.

“I can’t stress enough how much support I have gotten from the community, so I am humbled and ultimately very optimistic and excited by this opportunity,” Jonathan says. “There is so much potential here at the Clubhouse; we can deliver great financial numbers, but still have fun community events and maintain its status as the social hub it’s always been for Big Canoe.”

The post More good news at the Clubhouse: friendly face Jonathan Prince named food and beverage manager appeared first on Inside the Gates.