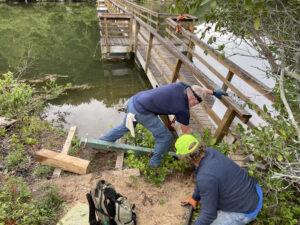 Joe Tipton, Mitch Waldman and I met at the pontoon bridge on Lake Disharoon to see if we could come up with a plan to reposition the bridge and anchor it properly. With the golf course renovation the bridge had lost one of its anchor points, and after the lake was refilled, the bridge had shifted, making it unsafe for people to walk on int. As a result the trail was closed with the bridge out of order. Maintenance suggested using some heavy equipment but it was going to be a difficult task due to the relative inaccessibility.

We did come up with a plan, the three of us, using ropes, a big jack, some timbers, and a winch. Today we went there and Glenn Arthur also joined in and 45 minutes later we had lifted and repositioned the bridge on its original footings and we re-anchored the moorings. The bridge is now open and so is the Lake Trail!

The post Pontoon Bridge repositioned and anchored appeared first on Inside the Gates.