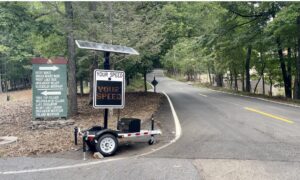 The Big Canoe Department of Public Safety has finally received the long-awaited traffic enforcement unit: a trailer with a mounted mobile radar and messaging sign that posts the speed of oncoming traffic.

The recently installed sign at Wilderness Parkway and Petit Ridge Drive displays an oncoming motorist’s speed and along with the message to “slow down” to those driving up to 10 miles per hour over the speed limit. Anyone moving faster than 10 miles an hour beyond the limit will see “too fast” flash on the sign and receive a written citation via mail.

The property owners spoke loud and clear in previous surveys about wanting additional traffic rules and regulation enforcement, so this is just one part of Public Safety’s mission to improve rules enforcement. Traffic complaints are no stranger to our office. Unfortunately, with nearly 100 miles of paved roads to monitor – along with assorted daily emergency and patrol duties taking up our time – our ability to dedicate multiple hours to traffic enforcement is limited. One of our 2021 goals is to improve enforcement and increase patrol officer visibility.

This traffic enforcement unit is as much about improving safety for motorists by encouraging them to change driving habits as it is about citing violators. The newly installed sign is in place all in the name of safety.

Video speed enforcement is not a new concept in the community. We have been using laser or video devices since 2013 to monitor traffic. Prior to 2013, Public Safety performed traffic stops, which were later ruled illegal in the state on private property roadways.

All violators will receive a mailed written citation as has been done in the community for a number of years. The fines, which range from $25-$200, are posted in the rules and regulations section on the POA website.

POA members can access traffic regulation info by signing onto the POA website (www.bigcanoepoa.org) and going to POA > Governing Documents > Rules and Regulation and scrolling down to Vehicle Safety and Control (A.3) on page five.

The post Traffic trailer installed to help keep speeding Big Canoe drivers in check appeared first on Inside the Gates.