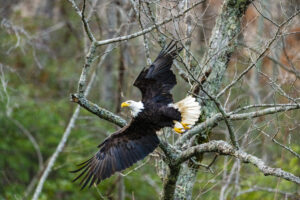 When it comes to Big Canoe’s wildlife, few animals are as iconic as the black bears that live in our mountain community.

Note to Big Canoe: the bald eagles of Lake Petit might want to have a say about that.

Quickly becoming as beloved as their furrier Big Canoe co-habitants, the bald eagles are a treasured Eagle Island sight by visitors along with our army of intrepid photographers, bird watchers and boating enthusiasts.

But not all is as it seems with eagles of Big Canoe when it comes to their place in Big Canoe history.

A duo of perched eagles. Photo by Marcia Captan.

Eagles arrive in Big Canoe: The Eagles first nested on Eagle Island in 2018, according to an Inside the Gates story that ran that year. Dr. Robert Sargent, the program manager of the Wildlife Resources Division at the Georgia Department of Natural Resources, includes tracking and monitoring bald eagles in Georgia among his numerous duties. He explained that Big Canoe’s “eagles and their nest first came to my intention when a resident of Big Canoe contacted me in February 2018. That person was interested in ensuring that the nest site would not be disturbed.”

The Eagles are protected and monitored: Though they are no longer endangered, bald eagles have federal protections to ensure that their population remains stable. The relevant acts protecting them include the Migratory Bird Treaty Act, and the Bald and Golden Eagle Protection Act. Due to their protected status, our eagles are routinely revisited by the Georgia DNR. Dr. Robert Sargent most recently visited the island on Jan. 25 to see if there was any nesting activity. He’ll return on April 5 to check on the progress of the nests, whether they have been disturbed by people, and how many eaglets we can expect this season.

Feeding time for an eaglet. Photo by Marcia Captan.

The origins of the Eagle Island name: Eagle Island didn’t exist until 1972 when Tom Cousins was developing Big Canoe and Lake Petit was created with the construction of Lake Petit Dam. However, the newly created island got its name long after and well before the current pair of bald eagles made 30143 their zip code of choice. According to a 2005 article written in Smoke Signals, the name may have actually been the result of a misunderstanding: A visitor on the Marina mistook some hovering the buzzards for eagles. Jim Worley, a resident of Big Canoe at the time, was supposedly so amused by the misunderstanding that he dubbed the place Eagle Island, and the name stuck.

You can’t get close, but you can get great snapshots of them: Eagles are majestic birds to photograph, but observers are legally required to keep their distance from Eagle Island in order to protect them. “As per federal law, we do not permit boaters, fisherman, or swimmers to go to that island,” says Lydell Mack, Big Canoe’s Director of Operations at Big Canoe.

The restrictions around the island pose a challenge to bird watchers and photographers, but it is possible to get a good look at the eagles without disturbing them. Marcia Captan, a Property Owner who often takes a photo of these raptors, recommends taking a kayak, canoe, or boat to a reasonable distance from the island. If you want to get a view of the nest itself, Marcia recommends driving up to the dam and parking at one of the designated spots. From there, you can use the dam as a vantage point to see the nest.

We can expect them to keep coming back: According to the National Eagle Center, Eagles have strong nest site fidelity, which means that they have a tendency to revisit the same nest year after year. Considering that bald eagles can live up to 20 years, our island may continue to be visited by its namesake for years to come.

“They are very special,” Captan says, “and we’re so lucky to have them.”

This article is part of an ongoing series looking back at 50-year legacy of Big Canoe.

The post Reflections at 50: The bald eagles of Big Canoe appeared first on Inside the Gates.