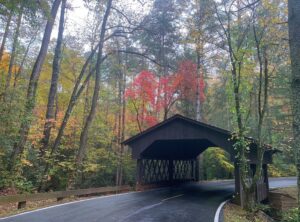 Wilderness Parkway has been a vital artery and Big Canoe’s main point of entry since its days as a dirt road in the early ’70s.

But after decades of crews repeatedly rejuvenating Big Canoe’s busiest street – and even more frequently repairing the Covered Bridge – Wilderness Parkway is beginning to sink in two areas, which will eventually create a safety hazard.

Rather than continuing with the short-term fixes that temporarily address the deterioration of Wilderness Parkway, the POA is taking a long-term, cost-saving approach to repair the road while also raising the bridge and installing two new guardrails.

The project requires the closing of Wilderness Parkway between the Blackwell Creek and Equestrian neighborhoods starting Feb. 6, with the road scheduled to reopen approximately six weeks later. With the exception of traffic to the Blackwell Creek neighborhood, all Main Gate traffic will be diverted to the North Gate during the construction period.

“Making sure that we maintain and protect the Covered Bridge is important, but even more crucial is ensuring that a road as vital as Wilderness remains open and safe for years to come,” says Lydell Mack, POA director of operations. “If we stand pat or do minor repairs, we’re just kicking the can down the road, which would lead to an even more expensive, more disruptive construction project. This work is nothing short of essential to the entire community.”

“With the cracking and sinking of asphalt along the road’s edge,” Mack added, “chunks of the pavement are in danger of breaking off and falling into the creek.”

An option that was explored included moving the road away from the edge, but crews instead will install a geosynthetically reinforced wall system that establishes a new roadway foundation and a more stable, erosion-resistant facing for the embankment.

The project will also include raising the roof of the Covered Bridge from its 11-foot 6-inch height restriction by two additional feet. Every year, the bridge is struck by large trucks and other sizeable vehicles whose drivers miss the multitude of warning signs posted about the bridge’s height restriction. Although the work on the bridge will not lead to a rule change allowing for trucks to enter via the Main Gate – such vehicles are required to use the North Gate only – the roof-raising is aimed at substantially reducing the risk of future collisions. Last year, the bridge was hit eight times, which forced the closure of Wilderness Parkway six times.