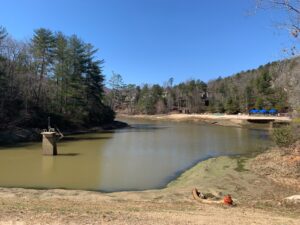 Anyone who has recently been down to Lake Disharoon may have noticed crews in diving suits plunging into the depths of the lake. Or, more recently, the dramatically lowering water levels.

Don’t be alarmed by the state of the lake as work is scheduled to be completed in early April.

The ongoing work on Lake Disharoon, which officially began on the week of Feb. 21, includes major upgrades to the shoreline by the Wellness Center and maintenance to some key Disharoon components. And that isn’t all that’s happening. Read on to better understand what’s unfolding at Big Canoe’s most beloved summer attraction:

1)  Lake Disharoon is being partially drained: As Wellness Center regulars have noticed from their ellipticals, the water level in Disharoon is dropping.

Unlike last year’s lowering of the lake, this is solely for crew members to replace the ancient rotted beach walk that connects the beach to the rock slide area.  This “beach extension” will consist of a modular concrete seawall, which will never need maintenance, a new, foot-friendly sand walkway for our kids to get to the rockslide, and a new canoe launch dock for our watercraft. All these enhancements require water levels be at least 10 feet below the lowest part of the seawall. As predicted, that is causing more silt to move into Lake Sconti. This is why we have postponed the Lake Sconti dredging operation till all Disharoon construction is completed and the busy season on reopened Creek 9 course is behind us.  Once all work is completed, the lake will be refilled in a few days as the Disharoon watershed is twice as large as Lake Petit’s.

Diving crews work on the maintenance at Lake Disharoon.

2) There’s going to be a beach extension: The extension will begin at the Beach Club and continue along the length of the shoreline in front of the Wellness Center, which will create a more inviting, sand-covered access area enclosed by a waterfront retaining wall. The sandy pathway will lead from the existing beach area toward the rockslide.

3) Sluice Gate maintenance: The purpose of the sluice gate, which is below the lake’s surface, is to control the water flowing from Lake Disharoon into Disharoon Creek and ultimately into Lake Sconti. Diving crews replaced on schedule all of the 50-year-old parts of the gate mechanism and the gate is operating flawlessly.

4) Improved watercraft storage: The project also creates a dedicated, better-organized storage area that can house up to 16 rental watercraft to take for a spin on Disharoon.

5) The project is scheduled to be completed in early April: Unlike the emergency maintenance issues that arose last year, the current work is on track to be completed long before the kickoff of our summer season.

6) Did we mention we’ll be open in time for the summer? The Beach Club is scheduled to open at 10 a.m. Saturday, May 28 on Memorial Day weekend and open daily 10 a.m. to 6 p.m. The expanded inflatable water park, the boats, and the

You’ll have plenty to look forward to this summer on Disharoon!

rockslide will all be operational and ready for summer revelers. All of this fun will be available to anyone with an Outdoor Aquatics Amenity Plan as well as people paying a day-use fee. For more info: Teri Sawyer at (706) 268-1092 or tsawyer@bigcanoepoa.org.

The post The top seven things to know about what’s happening on Lake Disharoon appeared first on Inside the Gates.