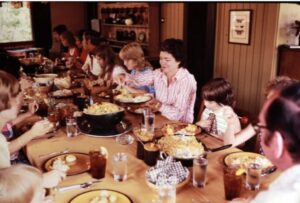 Ever wonder what it was like to join one of the legendary dinners that were commonplace in Big Canoe’s early days?

The Big Canoe’s 50th-anniversary lineup gets a celebratory exclamation point with the 50th Anniversary Grand Finale Event: Night of Nostalgia, a celebration of our community’s unquestioned ability to have a good time. This all-inclusive extravaganza on Saturday, Oct. 22, will feature:

A family-style dinner of down-home dishes including fried chicken, pot roast, mashed potatoes, green beans with bacon. The meal is inspired by the old Chimneys menu and the dinners served in the early ’70s in the Treetoppers, which were among Big Canoe’s first dining establishments. Seating will be family-style, with guests on the same reservation seated together.
The one-night-only return of the General Store. What was once a two-story community gathering place that sold groceries and mountain arts and crafts will return to its retail roots by offering Big Canoe 50th anniversary memorabilia, including “Big Canoe: The First 50 Years,” the commemorative book that visually charts the history of our community.
In celebration of our 50th, cake will be served at the old Big Canoe Realty Office.
The bluegrass band 8th of January will perform outdoors in front of the Chimneys.
In that tradition of the concerts staged by what was then the Swim Club, the Atlanta Soul Band will break out the old school and new school soul to capture the spirit of that amazing musical era. The show is from 6 p.m. to 11 p.m. on the Clubhouse Veranda.

There will be three dinner seatings at the Chimneys at 4 p.m., 6 p.m. and 8 p.m. Tickets for the entire evening, which go on sale by the end of the month, are all-inclusive at $75 for adults, $20 for children 12 and under.

The post Travel Back in Time for A Night of Nostalgia, Big Canoe’s Ultimate 50th Anniversary Party appeared first on Inside the Gates.