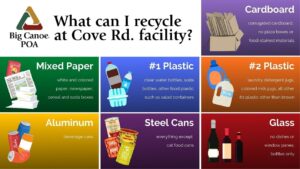 Recycling in the U.S. is broken – and Big Canoe is being forced to deal with that hard reality.

Until recently, China was the primary destination for materials marked for recycling. Since that country adopted its “National Sword” policy in 2018, its import of plastics and other materials destined for recycling processors has stopped. With most inbound plastics and other materials failing to meet China’s stringent purity standards, nearly half of all waste that the rest of the world considered to be “recyclable” is now rejected.

As a result, municipalities, communities and businesses were suddenly left with bins or shipping containers of “recyclables” that were considered contaminated – and with no place to go. For a time, they were taken by other countries in Asia and Africa that had cheap labor and weak environmental rules. But eventually, those nations balked at accepting the West’s contaminated waste.

“For Pickens County, these industry changes forced us to take a hard look at how we handled things,” says Kenneth Woodard, the waste/recycling director for Pickens County. “And as a result, we’ve had to reorganize how we recycle to make it worth our while.”

The Big Canoe trash and recycling facility will be going through some changes in the coming weeks.

While Big Canoe maintained and even diversified its recycling offerings, it has not been immune to the changes. When Big Canoe’s North Gate waste collection was bought out by Waste Management in 2020, the new realities in the ecosystem became more apparent: Big Canoe’s recycling was increasingly rejected because it failed to meet the stricter industry contamination standards. Now, recycling that previously might have generated a bit of revenue for Big Canoe is destined for a landfill – and comes with a waste disposal bill for the tainted load.

“The fact is that people in Big Canoe are taking the time and energy to recycle, but at the end of the day their stuff is not getting recycled if it’s contaminated,” explains Jacob Vansant, POA public works manager. “It’s just going into the landfill with the other trash.”

As Pickens County witnessed the change taking place, the volume of materials regularly brought in forced them to adapt, says Woodard. The changes the county was able to make at the East Side Recycling center at 9720 Cove Road created a functioning recycling operation that operates in the black.

Woodard says that their ability to make recycling work at the center is made possible only by having someone present during all hours of operation, which ensures that there is no contamination.

“Having someone here all the time is critical,” Woodard says. “Otherwise, all our bins would get contaminated and end up in a landfill.”

A solution just down the road

The Cove Road facility, which is just six hundred feet west of the Big Canoe traffic circle on Steve Tate Highway, includes a covered drop-off lane that allows vehicles to bring in their recyclables regardless of weather conditions from 8 a.m. to 5 p.m., Tuesdays through Saturdays.

Woodard emphasizes that educating those who use the center – they welcome both Dawson and Pickens county residents – is essential.  Individuals can drop off aluminum cans, corrugated cardboard, paper, #1 and #2 plastic bottles and containers, glass, and steel cans – provided they are cleaned, separated and put into their proper, clearly marked bins. Containers that have any food remnants cannot be accepted. The Cove Road center also collects garbage, charging $1 per trash bag.

“Recreating such a service inside the gates of Big Canoe is theoretically possible”, says Woodard, “but it would require staffing during all hours of operation to keep contamination from occurring. Big Canoe would also need to move from multi-stream recycling, where you just throw everything together in one bin, to have separate, dedicated bins for each kind of material you are gathering to recycle.”

Why not do this inside the gates?

Currently, the Big Canoe facility is open 24 hours a day, seven days a week. To convert the facility to a manned operation, the hours would either have to be significantly reduced or Big Canoe would have to hire at least three full-time employees to maintain the 24/7 schedule now enjoyed by Property Owners. Replicating the Cove Road experience would also require space to house as many as seven 8-by-20-foot bins, one for each recyclable material. Such space requirements and the ability to accommodate increased traffic flow are not options with the current design of the Big Canoe trash facility. Adding multiple single-stream bins to Big Canoe’s layout would worsen traffic jams during the more hectic hours on busier days.

As a result of these significant industry changes, the Big Canoe Trash Facility is officially converting its mixed-use recycling and single cardboard bins into trash-only receptacles on Tuesday, May 3, which will give Big Canoe Property Owners five total bins for collecting household garbage. The facility will continue to collect aluminum cans, yard waste and scrap metal.

Recycling at the East Side Recycling Center on Cove Road is color-coded to make it easier to know where to deposit your recyclables.

By using the Cove Road center for most of their recycling, Property Owners will be able to drop off materials at a location that is on the way to such frequently visited destinations as IGA, the Marble Hill Post Office and Foothills Plaza. And the single-stream, county-run set-up accepts a greater variety of items. Their system of individual color-coded bins for each recyclable material, closely tied to their policy of having an on-site supervisor, will dramatically increase the volume of what Big Canoe community actually ends up recycling.

“With all the changes happening in the world of recycling, this is the best possible solution for residents who are passionate about not adding to landfills,” says Gretchen Hudock, Big Canoe’s so-called “trash lady” who leads community recycling efforts. “Going to Cove Road facility is a no-brainer because it gives all of us a nearby option for recycling an even wider range of items that we know are going to get recycled.”

Hudock has compiled an alphabetized list of the recycling, donation and disposal locations most convenient to Big Canoe residents. If you have questions about what is accepted, please call the facility listed at the end of the document. If you want to suggest other drop-off locations or have any questions, please contact Hudock at trashtogo54@gmail.com.

The post Big Canoe expands recycling options, teams up with Pickens County appeared first on Inside the Gates.