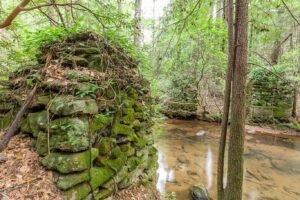 History leaves behind traces that sometimes go unnoticed or are at best dismissed. As a hiker strolls along Blackwell Creek on either the John Williams or the Covered Bridge trails, they might pause at the series of  pillars standing among the trees near the water. These stone stacks, however, serve as a reminder of the history Big Canoe was built upon.

The weathered rock structures are all that remains of a bridge that had been built over Blackwell Creek in 1915 – part of a road leading to the house that once stood between the Big Canoe Realty office and the Chimneys facility, according to the signs posted by the creek. The building was home to instructors who taught at the Tate Mountain School, which later became known as the Wolfscratch School. The house eventually burned down, leaving behind the iconic chimneys that inspired the name of the adjacent Chimneys facility. As for the Wolfscratch School – the building is now used as our Racquet Club Pro Shop.

Despite inquiries to local historians, long-time residents and stewards of the trails, details about the bridge and its demise are still unclear. Though its history remains mostly forgotten, the bridge still leaves a prominent mark. The pillars stand as high as 8 feet tall – each hinting at the size of the sizeable bridge that once crossed the creek. But don’t take our word for it: these century-old remnants are sure to get most any hiker’s imagination running.


The post Reflections at 50: The Blackwell Creek Bridge appeared first on Inside the Gates.