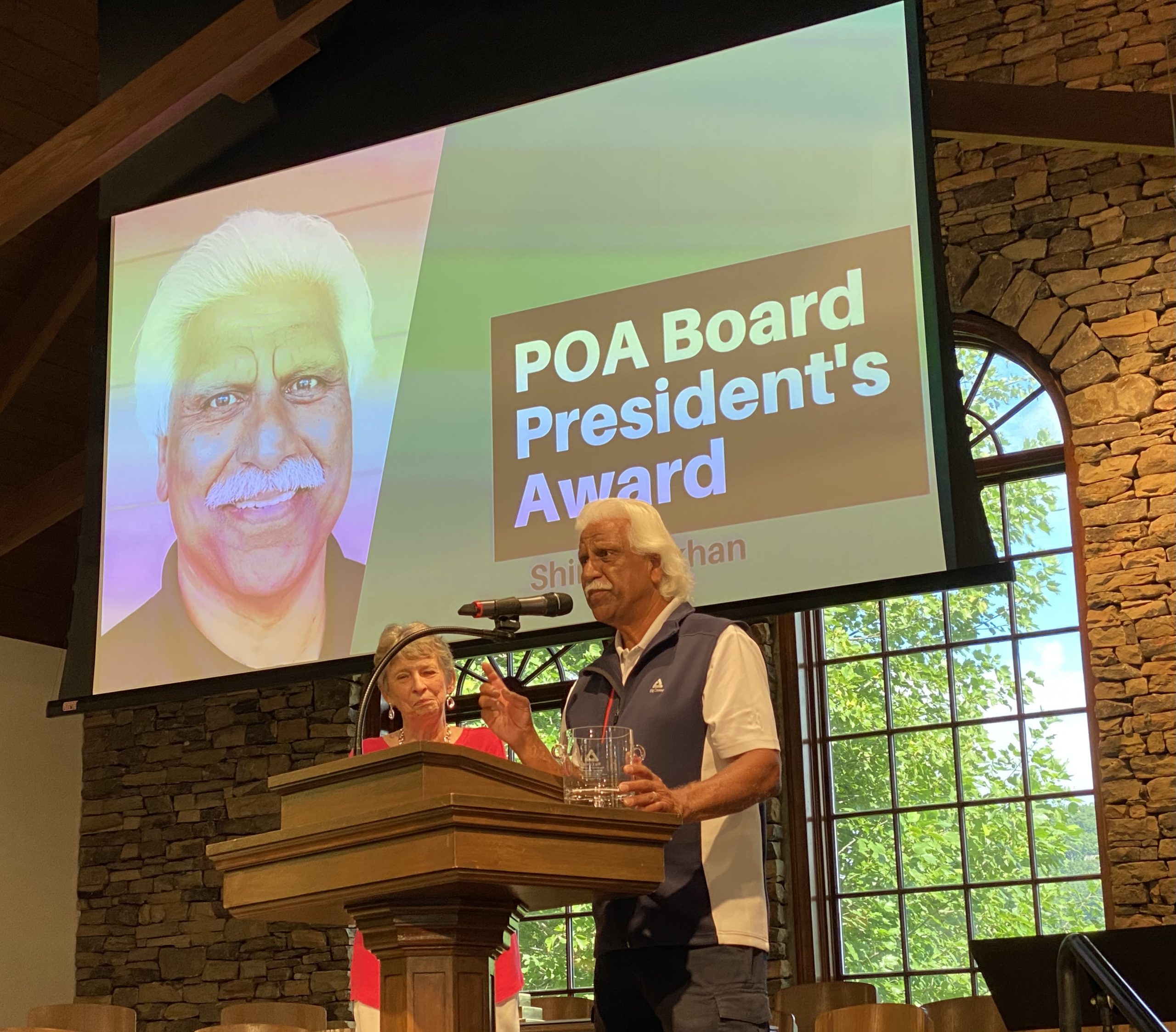 Shiraz Alikhan is probably known more around Big Canoe as a golf-course regular who moonlights as a performer with the Acoustic Showcase – not some guy who’s logged 40 odd years as an information technology executive.

At the July 17 Town Hall meeting, this longtime Big Canoe resident became known as something else: the 2021 recipient of the President’s Award. POA Board President Candace Robertson presented him with the recognition given annually to an individual volunteer making a significant impact or contribution to the community.

Volunteering has remained a focal part of Shiraz’s life since he and his wife Kat moved to Big Canoe in 2004. He’s board president of the Wellness Collaborative, a non-profit organization that provides non-emergency and non-medical services including meals, rides, visits and referrals to the residents of Big Canoe. Before that, he was board president for Literacy Volunteers of Atlanta, which provides one-on-one literacy tutoring to adults. Shiraz also hosts a show featuring the music of the late ’60s/early ’70s San Francisco for Inside the Gates Radio 4:30-6:30 p.m. Sundays.

We got Shiraz to sit down long enough to fill us in on his volunteering, his secret life as a model, and how he survived the 1989 Loma Prieta earthquake that struck the San Francisco Bay Area.

Q: How did you get so involved in the Wellness Collaborative?
A: In 2013, several folks created a committee and asked, “How do we keep people in their homes longer in Big Canoe?” The Wellness Collaborative came out of that. They recruited people for the operational part to get programs up and running and I was part of that – the first chair of what we called the steering committee. We came up with the processes and procedures, recruited volunteers, did the training, started the publicity and communications.

Q: What other activities are you involved with here in Big Canoe?
A: I really try to take advantage of the amenities. I am a golfer – I play three times a week. I am a tennis player – I play once a week in a doubles group. And I support things that my wife Kat is involved in, like the Artists Club and the Photo Club. We go to events and exhibits. All of these different activities have been a great way to have different circles of friends. That’s one of the things you can find here in Big Canoe.

Q: What music do you play at the Acoustic Showcases?
A: I learned how to read music when I took accordion lessons when I was 12 to 14 years old.
But I got bit by the bug like a lot of people and I got a Beatles songbook and a cheap guitar. when I was 14. I haven’t looked back. So I do Beatles stuff, Eagles, Byrds, Joni Mitchell. Cat Stevens, John Denver. But I also have done stuff like Pete Townshend’s “Let My Love Open the Door” acoustically, so it’s a broad range.

Q: Speaking of the music, how did you get involved with Inside the Gates Radio?
A: I was a fan and when Craig Looney, one of the founders, was gone one weekend in July 2019, I asked him if I could sit in. I did the program and they said, “Hey, you should do this on a regular basis.” The radio for me has been another way to continue to foster this sense of community here.

Q: How would you sum up your professional background?
A: The major part of my career was in informational technology management, so that included data center management, information technology strategies and disaster recovery for data centers. Really started my IT career at Bank of America. Then I went to Charles Schwab in ’88, and I was managing the computer operations department in San Francisco when the 1989 earthquake hit (the San Francisco Bay Area).

Q: Where were you physically when it struck?
A: We were at (the) 101 Montgomery Street (office building) on the seventh floor. When it happened, I was still in the office . . .

Q: Wait! You were not watching the World Series between the two home teams: the San Francisco Giants and the Oakland A’s?
A: I was working! Anyhow, the floor was rolling. We were there throughout that night making sure we were up and running the next morning. Back home, half of the water in our swimming pool had sloshed out.

Q: Based on the music you play on your radio show, you must have seen a lot of concerts when you grew up in the Bay Area. What comes to mind?
A: The Rolling Stones with Stevie Wonder opening in ’72 at Winterland. Another show that was memorable in a different way: The Who played the San Francisco Civic Auditorium when “Who’s Next” came out. Halfway through the show, people started going to the back of the room, away from the stage, because it was so loud.

Q: Is there something about you that people don’t know that would surprise them?
A: I’ve done a little bit of modeling. And the fact that I was born in the Fiji Islands.

Q: Modeling?
A: When I was at Schwab, they picked employees to represent certain occupations in the marketing materials. You have to guess what occupation you think I was portraying.

Q: I don’t know. IT guy?
A: A lot of people ask me if I am a doctor. I played one in marketing material for Schwab.

Q: How did you come to the states from Fiji?
A: My dad came here in ’55, got a job with Pan-American Airlines as a machinist, brought my mom, my brothers and myself. I was 4 ½. We were naturalized in ’62.

Q: Do you have a specific travel experience that was particularly memorable?
A: We’ve had so many great trips. I was able to retire early at 58. We went to Africa on safari. One of the trips that comes to mind – we spent a month in New Zealand. We explored the whole country.

Q: What’s your favorite meal
A: It’s my mom’s shrimp curry. I had my 18th birthday dinner and my mother made me roti (flatbread) and curry and my friends couldn’t believe I didn’t weigh 300 pounds. They thought the food was great too because my mom was a great cook.

Q: You recently hosted a radio show where you got reflective about turning 69. What life advice do you have for others as you approach your 70th?
A: The main thing is to not put things off. One of the things I would like to do is get some songs down for posterity in a recording. As I turn 69, I am thinking it’s something I should do.

Q: Speaking of music, do you ever play some of your original songs at the showcases?
A: I have a couple of times. In fact, there is a song I wrote for my neighborhood, Blackwell Creek, that I have performed. It’s kind of a rolling pop-country kind of thing.

Q: You have a favorite movie?
A: It affected me so much when I first saw it , but the original “The Day the Earth Stood Still.” The whole idea of it was that the people needed to come together to be at peace with each other. It was a message that resonated with me at the time.

Q: Why live in Big Canoe?
A: We’ve been here for 17 years and that says a lot because we could choose somewhere else. It has the community we’ve been looking for, it has the amenities, the proximity to a larger city. That’s why we’ve been here.

Q: Describe your perfect day for me.
A: One of the things that has been great is that I feel like I married well. Kat is not only a wonderful wife, but she is my partner and my best friend and to be able to get up every day with her is a great start. And then walking our dog, Smarty Jones. And to be able to play a round of golf, to play some music and spend some time with friends. All of that would be part of a pretty good day.

Q: It kind of sounds like what you do every day.
A: It’s not bad!

The post Getting to know Shiraz Alikhan, the 2021 the President’s Award recipient appeared first on Inside the Gates.