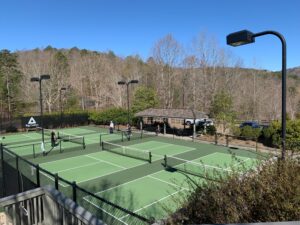 As much as the major improvements to the Creek 9 or the Beach Club have been getting everyone’s attention, the Racquet Club has been scoring one major enhancement after another over the past nine months. Consider that since June 2021 it has completed the following:

The indoor tennis facility at the Wellness Center had a complete makeover with the roof replaced, its two courts resurfaced, and the entire space cleaned up. New backdrop curtains, a complete renovation of the bathrooms, improved lighting, and a freshly painted upstairs viewing area.
With the conversion of two hard courts to clay courts, the number of Racquet Club clay courts is up to six. All have a new HydroGrid clay surface, which cuts water usage in half; is more erosion resistant; and requires less maintenance than other clay surfaces.
Both hardcourts were resurfaced
Bocce, one of Big Canoe’s most beloved amenities, returned with plenty of fanfare with the June opening of four new beautifully designed bocce courts at the Wildcat Pavilion.

In a sense, the Racquet Club is home to multiple amenities – though not all at the same location. Along with bocce by the Wildcat and the indoor tennis at the Wellness Center, there are outdoor clay and hard courts and four courts dedicated exclusively to pickleball. Here is a breakdown of all things Racquet Club:

While tennis is the better-known sport, pickleball has spiked in popularity in recent years. A combination of tennis, badminton and table tennis, its growth can be attributed to how easy it is to pick up.

“Pickleball takes about an hour to learn to play,” Geoff says. “Whether you’re a tennis player or if you’ve never held a racquet or a paddle before, it’s really simple.”

It’s a sport that can accommodate multiple skill levels – and in the same match. A veteran could play with a novice and still have a good time.

Among the upcoming racquet sports events:

Pickleball Educational Clinics noon to 1 p.m. on Thursdays: If you would like to learn how to play pickleball or just have interest in sharpening your skills,
Tennis Clinics will be held on 10 a.m. on Fridays.
Spring Tennis Clinics will begin on Wednesday, April 6. Time to be determined.
Junior Tennis Camps will begin of Tuesday, June 16. Time to be determined.
Mixers and Round Robins are also held throughout the year. The next set of Round Robins will be on Saturday, March 19. For men, this will be from 8 a.m. to 10 a.m. For women, the Round Robin will be from 10 a.m. to noon.

If you’re looking for something more leisurely, than bocce might be of interest. Also known as Italian lawn bowling, the game has each team to roll four colored balls as close as possible to the white ball, a.k.a. the palino.

To play, residents need to register through the POA website. Visitors are required to call in at 706-268-3367.

Open only to Property Owners, Big Canoe’s Bocce League kicks off at 9 a.m. on Saturday, April 9. Participants can sign up with a full team of four or get teamed up with other players also looking to join a squad.

The league season runs until the final weekend of May with playoffs are in the second week of June. Also, look out for a fall league season announcement with more details forthcoming.

“We’ve been stuck on two tennis indoor courts for the last few months because of persistent cold weather,” Geoff says, “so people can finally look forward to being outside again.”

For more information about bocce, tennis or pickleball, call the Racquet Club at 706-268-3367.

The post Just in time for spring: Racquet Club kicks off the season with clinics, league play and more as it makes the most of recent amenity upgrades appeared first on Inside the Gates.