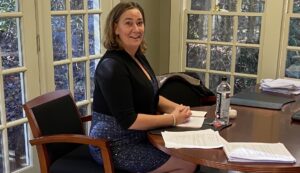 If you ask Carrie Scott, the new Director of Amenities where she got her first bit of on-the-job training, it was as a six-year-old dashing about the deck of the U.S.S. Gallery.

Carrie got a crash course in large-scale management from her father, Capt. Norman Scott, at the time the commanding officer of the guided-missile frigate, when she and the assorted children of its crew were invited to tour the vessel docked in Brunswick, Maine in the ’80s.

One of Carrie’s biggest takeaways from the experience was how her dad expressed his appreciation equally for both highly decorated officers and the most junior sailors.

“If there is one thing that I learned from my dad,” Carrie says, “it’s to work hard and to appreciate everybody who works for you. You treat housekeepers the same way you treat CEOs – with respect. Everyone should be treated equally.”

Carrie joins the POA at a perfect time of transition with the new strategic plan calling for a clear focus on improving Property Owner service across amenities and at the Clubhouse. One priority is to bring in a concierge who can service Property Owners and guests, answer any questions, and help schedule meetings for clubs and organizations. However, she understands that as the heart of the community, the Clubhouse should be the community’s gathering place that caters to everyone from walk-ins to major entertainment events.

Her immediate priorities are to work with and augment the team now in place. Among her goals: Hire a food and beverage director, who can “take the reins” in leading the team in both the front and back of the Clubhouse; and to bring in a complementary food and beverage manager who supports both the day-to-day activities along with larger clubhouse initiatives. Also in the works is the programming of a steady stream of events and activities, from concerts to bourbon and cigar tastings to a more varied, regularly refreshed menu.

“The Clubhouse is the hub of Big Canoe and it should be buzzing,” she says. “And it will be.”

Her aim is to make Big Canoe a community where you think of leaving only to go to a doctor’s appointment or to pick up groceries, where the Clubhouse is your home away from home, she says.

With more than three decades of hospitality and leadership experience, Carrie most recently was director of food and beverage and the interim executive chef at the Hermitage Country Club near Richmond, Va. At various stages of her career, she also has served as an assistant general manager, a sommelier, a bartender and a dishwasher – when she wasn’t living on a sailboat in Alaska. She so far has lived in 40 states but “this is my last move,” she explains. “I like it here.”

Carrie learned much by observing how her dad managed his personnel. He is the living embodiment of how connecting with individuals is so key, a people person who speaks to every sailor he ever served with. When he retired in 1994, some 6,000 attendees joined him for his sendoff.

Her mother Cheryl was no less influential on her. A basketball coach and an English professor, she reinforced the merits of teamwork and good communications skills, that sitting on the bench vs. starting makes you no more or less integral to a squad.

Even before she met her new team, Carrie, like many before her, was struck by the natural beauty of Big Canoe along with the emblematic covered bridge. After getting a full tour of the place, Carrie quickly identified her highest priorities. From the get-go, she will focus on enhancing the Property Owner experience as she helps “to create new memories.”

“What I have learned about Big Canoe,” she explains, “is that people want a fuller experience, whether you are asking a team of employees or the Property Owners. They’re all excited about achieving more in Big Canoe and absolutely love where they are living. And what’s not to love?”

The post New Director of Amenities Carrie Scott hits the ground running appeared first on Inside the Gates.