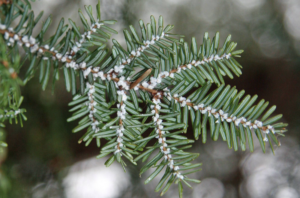 The woolly adelgid is not going anywhere.

The white, fuzzy pest that attacks hemlock trees in Big Canoe and throughout the eastern United States has been targeted by the POA’s Grounds and Landscaping Department staff for years. While regular treatment has kept in check the invasive, sap-sucking insects, Grounds and Landscaping Manager Mathew Parks and his crew are gearing up for another round of bug busting the week of April 18. They will be joined by members of the Big Canoe Trails Committee, who will ride along to assist in documenting areas that have been treated.

“The woolly adelgid is something that we have to keep on top of,” says Matthew. “We are fortunate in that we can combine our staff with members of the Trails Committee and Property Owners, who are our eye and ears in the community. When we team up, what could have been an overwhelming task becomes much more manageable.”

Mathew noted that he has already received more than 60 requests from Property Owners to address woolly adelgid infestations.

The Grounds and Landscape Department has enlisted professionals who specialize in eliminating woolly adelgid by injecting a systemic insecticide into the soil around the tree trunk base. Absorbed by tree roots and transported within the tree to the shoots and needles, the pesticide kills off the insects.

Known by its Latin name adelges tsugae, the woolly adelgid is a sap-sucking insect originally from Asia that has also been found in western North America. The relative of aphids and whiteflies preys on the eastern hemlock (tsuga canadensis). Preserving hemlocks is essential as they are a foundation species and one of the most common trees in eastern North American forests. The potential loss of the species would be nothing less than an ecological disaster, according to environmentalists.

The woolly adelgid appears as tufts of small white fuzz on a hemlock branch, which hardly looks like the work of an insect. However, these waxy little patches don’t move much once attached to an infected location in the leaves of the tree.

On the week of April 18 – weather permitting – hemlocks around Big Canoe will be treated for the pest.

If you spot any woody adelgids either on your property or in public spaces, please contact Mathew and his staff at hemlocks@bigcanoepoa.org or 706-268-3319.

The post POA Grounds and Landscaping to treat hemlocks in Big Canoe for woolly adelgid appeared first on Inside the Gates.