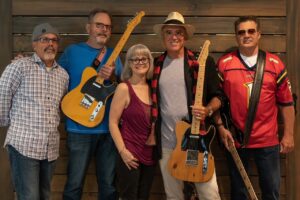 Ellen Bennett is a multitude of things – a graphic designer, an opera fan, a car-ride vocal soloist. On the stage, however, she is the lead vocalist for Sock Monkey. She and guitarist Jim Murphy frequently perform at local venues and at the Acoustic Showcase here in Big Canoe as a duo, but they are also part of the five-piece Electric Sock Monkey band, which also features musician Tom McGuire and Big Canoe staple Steve Smeltz. To help the community get to know this familiar face a little better beyond her role as a performer, we invited her answer a few questions.

Q: How did you end up in Big Canoe?

A: My husband Bill and I met two couples from Big Canoe in Alaska on an UnCruise 10 years ago. We bought our “vacay place” here in 2016 and soon after my office gave me the option of working remotely, so we ditched the Johns Creek house.

Q: What you do for a living and how does performing fit into your life?

A: I work for the Georgia Dept. of Education School Nutrition Program in the Communications Division. I create graphics, manage the website, and edit audio and video training. I love it. Where else would I find a job that takes my experience as a graphic designer and pairs it with running a middle school cafeteria?! I was only singing in choirs and as part of the worship team at North Point Community Church until I went back to my 25th college reunion at Marywood University in Scranton, PA. I reunited for a gig with my former band mates (a total blast) and when I came home I realized that’s what was missing in my life.

Q: You have had quite the range of professions, from proofreader for a textbook publisher to middle school cafeteria manager to advertising art director for the Atlanta Business Chronicle. What is the most unusual job that you’ve held?

A: My first paying job was little league umpire when I was 12. One of my favorites was bartending at the Bowl-a-Rama bowling alley in Somerville, N.J.

Q: Who are your biggest inspirations as a vocalist and musician?

A: Motown maybe? I am the youngest of 6 – by a LOT – so I listened to whatever they did. My parents were married in the 1940s so big bands are a favorite, too.

Q: How long have you been performing with Jim?

A: Jim and I met in 2017 through Brad Morgan. We immediately realized we both had the same stupid sense of humor and the rest is history. I think our first gig together was for the Mardi Gras party in 2018.

Q: According to a 2018 article, you’re a closet opera fan. Are there any singers or particular performances that you would recommend to people unfamiliar with opera?

A: “Carmen”! Only because I know it well. I am actually on a vinyl recording as a member of the Factory Girls ensemble in “Carmen” for the New Jersey High School All-State Opera Festival way back in 1979.

Q: If you had to list, say, your five or 10 favorite vocal performances on record, who would that be?

Ella Fitzgerald singing Gershwin.
Pavarotti singing anything that’s not in English.
“Love Reign O’er Me” off “Quadrophenia” by the Who
Whitney Houston’s “Star-Spangled Banner”
Handel’s Hallelujah Chorus (gets me every time!)
Elton John’s live version of “Funeral for a Friend/Love Lies Bleeding”
Stevie Wonder’s “Songs in the Key of Life”

Q: What would you say is the most difficult aspect of being a music talent?

A: Talking about it! Everyone can and will sing if they feel like it. I just get to do it for an audience. And people telling me I should go on The Voice? Maybe when they launch a geriatric version! I have been under contract and have cut a CD in a studio which never led to anything, so that ship sailed for me many years ago. I’m quite content and hope to be able to sing as long as anyone wants to hear me.

Q: Do you play any instruments?

A: I try! I can strum a few chords on a guitar and have been known to play a mean tambourine, but it’s incredibly hard for me to do both at the same time. Bill says anytime I try to play along, the song immediately becomes an instrumental because I forget to come back in. And he’s not wrong!

Q: Are you particularly fond of singing in the shower or in the car while listening to music?

A: Car all the way. Even if the windows are down.

Q: What was your reasoning behind calling your duo Sock Monkey?

A: We were looking for a general band name and it’s almost impossible to come up with something unique. So, we just started throwing out things. Really random things. Jim said, “How about Sock Monkey?” I said, “I LOVE Sock Monkeys!” Jim replied “Who doesn’t love a Sock Monkey!” And there you have it.

Q: What has it meant to you to be able to perform for Big Canoe?

A: There has never been a more supportive musical audience than Big Canoe. Which is good and bad because you never know if you are actually any good! A few years ago, I said my goal was to hit the Big Canoe musical trifecta and play at the Acoustic Showcase, the Veranda, and the Terraces. And thanks to Bob Mackey, it happened last year. That gig on the July 4th weekend was off-the-chain fun! We’re hoping for a repeat gig there in the fall.

Q: Do you have a favorite motto or quote?

A: Nope. That evolves as I do.

Q: Can you share something about yourself that would surprise most people?

A: Jim and I are not related at all! You wouldn’t believe how many people ask if we are married. I tell him I’m the little sister he never wanted. My maiden name is Murphy and I use that for my social media account. Even people who only know us as Sock Monkey assume we are married because we play music together. I can’t name one married duo that didn’t end in divorce! So Jim’s stuck with me.

The post Q&A with Ellen Bennett, Big Canoe’s resident chanteuse appeared first on Inside the Gates.