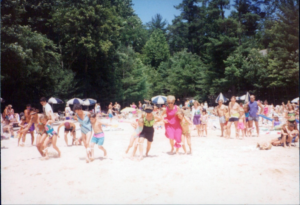 When Lake Disharoon re-opens on Saturday, May 28, the beach will be extended in front of the Wellness Center, there will be a new storage area that can house up to 16 rental watercraft, and revelers will have a new menu at the Beach Club.

However, change is nothing new to Disharoon and the Beach Club. The Beach Club, known as the Swim Club when it opened in the early ’70s, has gone through many changes through the decades. And this much has remained the same: it’s always been the go-to summer destination for the Big Canoe community.

Below is a selection of photos documenting the fun that has become synonymous with the Disharoon and the Beach Club.

An intense, nail-biting sack race on the beach.The victor, hanging out on the dock.While there is currently a rockslide just past the dam on Disharoon, kids enjoyed this slide and accompanying diving board that were in the middle of the lake.There used to be only canoes and pedalboats. Since then, the Beach Club has added watercrafts such as stand-up paddleboards and kayaks.And the race begins!Goldfish, Coke and beer – what more could one want for a picnic?Hanging out in the sand.Residents know that when summer rolls around, the crowds are sure to follow.The wooden deck tables were eventually replaced by composite tables, which could better handle the outdoor conditions.In just the past decade, Beach Club has made substantial changes, including the addition of an inflatable waterpark that can support 60 kids at a time and an outdoor music system.

The post Reflections at 50 – Lake Disharoon and the Beach Club appeared first on Inside the Gates.