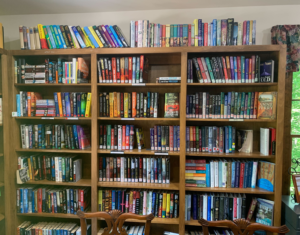 Of all of the nooks and crannies in Big Canoe, perhaps some of the most surprising things can be found in the Big Canoe Chapel.

For instance, did you know that there is a community library on the ground floor of the Broyles Center?

“The library is just a great resource for the community,” says Kaaren Arthurs, a co-chair of the library committee. “People thank us all the time. But so many new people come into Big Canoe and they often don’t know about it.”

The Chapel library was founded in 1982 by Rachel Hurley, Ethel Smith and Aileen Oliver, three former residents of Big Canoe. The trio donated books from their personal libraries, typed out checkout cards, and set themselves up in the Chapel’s Bridal Room, which was initially only used for Bible study.

Photos of Bloodworth and the library expansion. These images are from Charlene Terrell’s book ‘Church in the WIldwood’.

When the Broyles Community Center was built in 1989, the library was moved to its new location on the lower level of the center. It was expanded, along with the rest of the center, in 1997. The facility finally earned its name – The Elizabeth Bloodworth Memorial Library – in 1998 in honor of Bloodworth for the time and books she had donated to the library since its founding.

Perhaps, unsurprisingly, the library has a wide selection of religious and spiritual works. However, one can also find the works of such perennial best-sellers as James Patterson and Tom Clancy on the shelves. Movies and audiobooks are also available to check-out.

Judy Bellenger, the chair of the Communications Committee at the Chapel, says that children’s films – which have their own section currently in the hallway – are very popular.

“Grandparents like to come here and pick out a film whenever their grandkids come over,” says Judy.

When you’re finished, just return your book or movie to this box.

The library is open to the community, regardless of an individual’s affiliation with the Chapel. To check out a book, simply fill out the card at the back of the book or movie, drop the card in the box, and leave with the book or film of your choice. To return it, drop off the book in the box outside of the library.

Thanks to the local book clubs here in Big Canoe, the selection at the library is always expanding. If you would like to donate a book or funds for the library, please contact Kaaren Arthurs at 770-337-8863 or Susan Newton at 706-268-3140.

The post Reflections at 50: The Big Canoe Chapel’s Bloodworth Community Library appeared first on Inside the Gates.