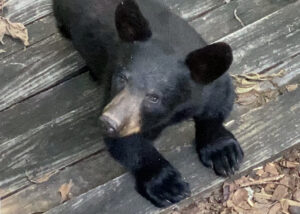 The Black Bear Project has reported an uptick in bear sightings. The Big Canoe organization that promotes harmonious living with the area’s wildlife recently pointed us to a very informative article about the recent increase in bear sitings as reported by BearWise, the program developed by black bear biologists and supported by state wildlife agencies.

Among the key points raised in the BearWise article about interacting with bears, regardless of whether you are in Big Canoe:

More people in bear country. An increase of those in favor of the quiet life is moving from big cities to more rural areas. During the pandemic, people were also pushed to find entertainment somewhere much less people-y, which meant returning to the great outdoors. Bears have had to share their homes more and more. That means more bear sightings.
Another reason we are seeing more bear sightings on social media is the abundance of technology available. With the invention of smart security systems, doorbells linked to cameras, trail cameras, and more people working from home, bears are being caught on camera when previously they may have made it past our homes unseen.

Where are these bears going? Are they just passing through? BearWise also tells us that most bears out and about in June fall into three main categories:

Juvenile male bears that were denned with their mothers last winter and were kicked out by mom in the spring. Much like human teenagers, these juvenile males are still learning how to be an adult bear. They are wandering around trying to find a place to call their own and they will eat anything they deem food, also like a human teenager. These bears are inquisitive and will quickly learn the ins and outs of bearhood, so we need to be sure all of our garbage and food items are secure.
Adult male bear looking for a mate, usually starting in June. Bears may mate several times in the early summer, and while the female bears stick close to their territory, male bears wander far and wide to find mates during mating season.
The new mama bears who have many mouths to feed. Food sources available during the early summer months are not as nutrient-dense as foods found later in the year, so the bears must forage more this time of year. Cubs are also learning a lot during this time with mom. We can help the bears develop good habits by practicing them ourselves and making sure all food and garbage are kept in a secure, bear-proof place.

Remember that we are living in their home, not the other way around. While they can be fascinating and sometimes cute to watch, make sure that is your only interaction with our bear neighbors keeps all of us, including the bears, safe. Go to the BearWise website for other essential bear facts to ensure everyone’s safety.

The post The Black Bear Project: Expect More Bear Sightings appeared first on Inside the Gates.