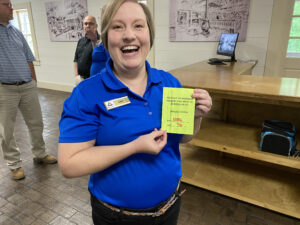 The Package Porch had its official unveiling at 1 p.m. today with a ribbon-cutting ceremony kicking off the new POA facility, which aims to solve the parcel spillover issue in the Postal Facility.

Opened in the lower level of the building that houses the Village Station meeting rooms, the Package Porch allows for the collection, sorting and storage of all oversized and excess parcels for Property Owners to pick up. The porch itself, with four tables inviting visitors to have a seat, was also designed as a cozy hangout.

In attendance at the ceremony were Jason Brownell, director of operations, who conceived of the project; Anu Saxena, director of capital projects, who shepherded it through the numerous steps to the finish line; Package Porch staffers Priscilla Jordan and Amy Dixon; POA board members Candace Robertson and Amy Tropfenbaum; General Manager Scott Auer; and Debbie Pickett, director of administrative services.

Property Owner Mark Decker was the first official patron to nab a package.

Deline Faris, who also attended the ribbon-cutting, and Kim Miller individually submitted the winning entries in the contest to name of the facility. Both received a $50 POA gift certificate.

The Package Porch, across from the Fire Station in Wolfscratch Village, is open 1-6 p.m. Monday-Friday, 11 a.m.-5 p.m. Saturday.

Learn more about the Package Porch and how you can collect your packages here.

The post The Package Porch officially open for business – and lounging appeared first on Inside the Gates.